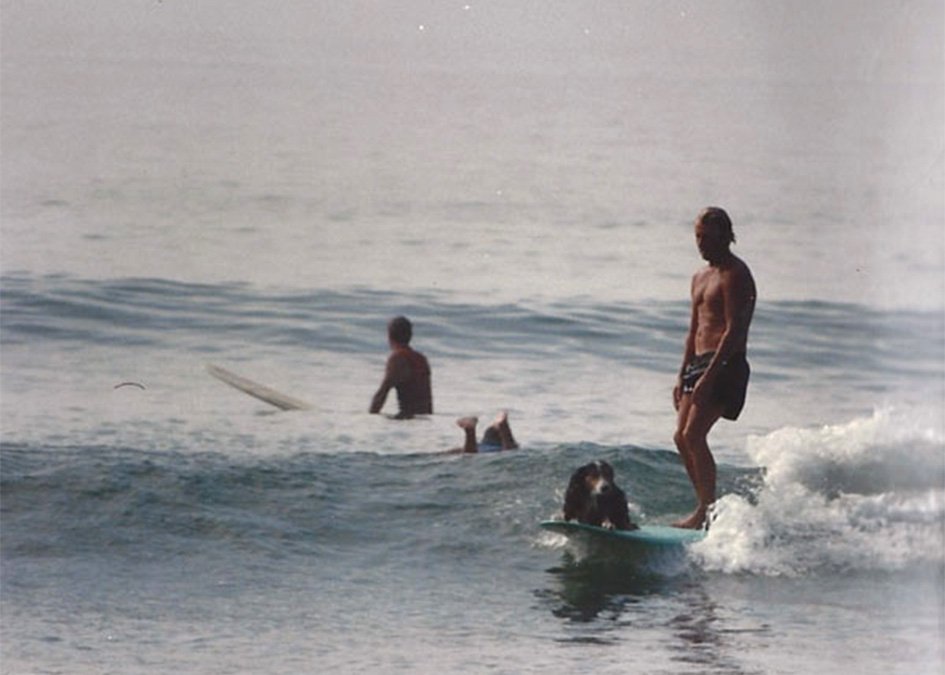 The Fine Art of Trim

“Ponce DeLeon sailed the ocean in search of The Fountain of Youth, when all he had to do was jump over the side of his ship.” 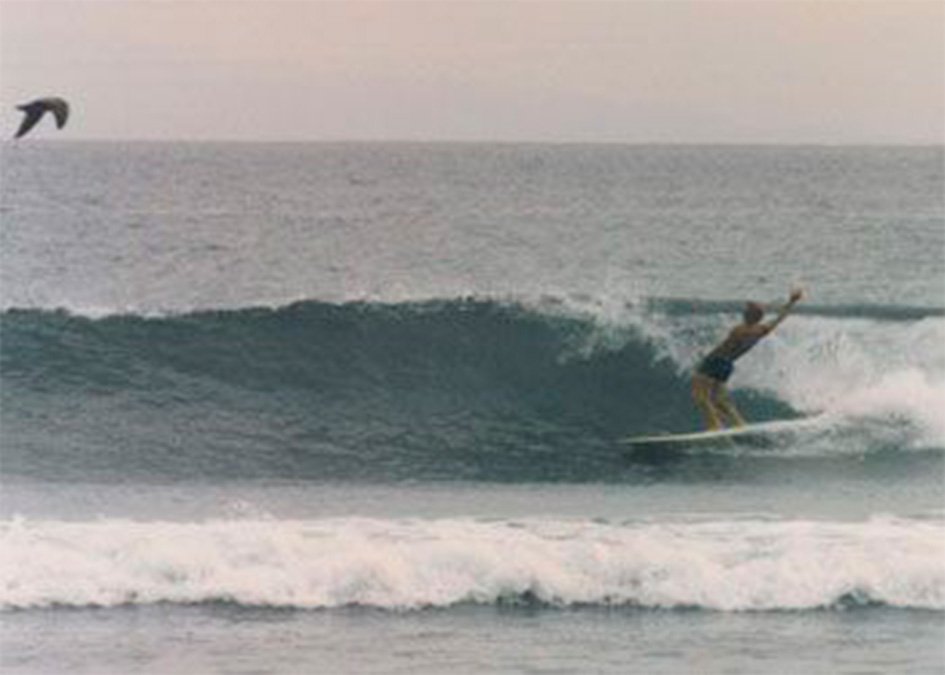 When it comes to finding the perfect angle of trim on a wave, few surfers are more closely associated with its mastery or with shaping the sorts of surfboards to achieve it, than Skip Frye.

Frye was born Harry Frye (The nickname Skip came about because his father, who was in the US Navy, appointed him “skipper” when he was away from home) in 1941 in San Diego, and started surfing when his family moved to the beach-side suburb of Pacific Beach when he was sixteen. By 1958 he was hooked, and just five years later he began shaping his own surfboards. By the mid-sixties he was shaping surfboards for Gordon & Smith Surfboards and had developed a reputation as one of California’s best competitive surfers, competing alongside his club-mates from the notorious Windansea Surf Club of which he was an original member. Through the sixties Skip travelled extensively with Windansea Surf Club, most notably to Australia in 1967 where he came across Bob McTavish’s shorter, more manoeuvrable, vee-bottom surfboads. This was the start of the shortboard revolution, and Frye is credited by surf historian Matt Warshaw as the first west coast shaper to begin replicating McTavish’s design theories after returning to California, and with bringing the revolution to the US mainland. Skip continued to experiment and refine, on one occasion in 1969 rounding off the tail of his 6’6” vee-bottom, and then shaping a new board using the rounded tail template for both nose and tail, creating the Egg – a design which is still hugely popular to this day.

Skip is just as synonymous with other enduring designs, though – most notably the fish, and his 9-foot plus, parallel-railed Eagles. The Fish was conceived by Frye’s San Diego neighbour Steve Lis, and over the last fifty years or so he’s stayed true to the original design concept, doing little but stretch the length of the template over time. This commitment means that the adjustments that he’s made have been minute, but considered, and the result is that a Skip Frye fish is the most refined shape available – if you could ever get your hands on one.

The Eagle was a design born of Frye’s G&S signature model in 1967; incredibly long with full pin tails, they are trim-machines designed to glide and cover vast distances at speed, both on waves and when paddling. His Eagles led Skip to develop his infamous “cross-country” style sessions when surfing his local reefs around San Diego, riding a wave as far as possible on one of his 12 foot Eagles before paddling out to the next peak or break along and doing the same there. In this manner he’s been known to frequently connect seven or so different surf breaks, sometimes more, in a single session. 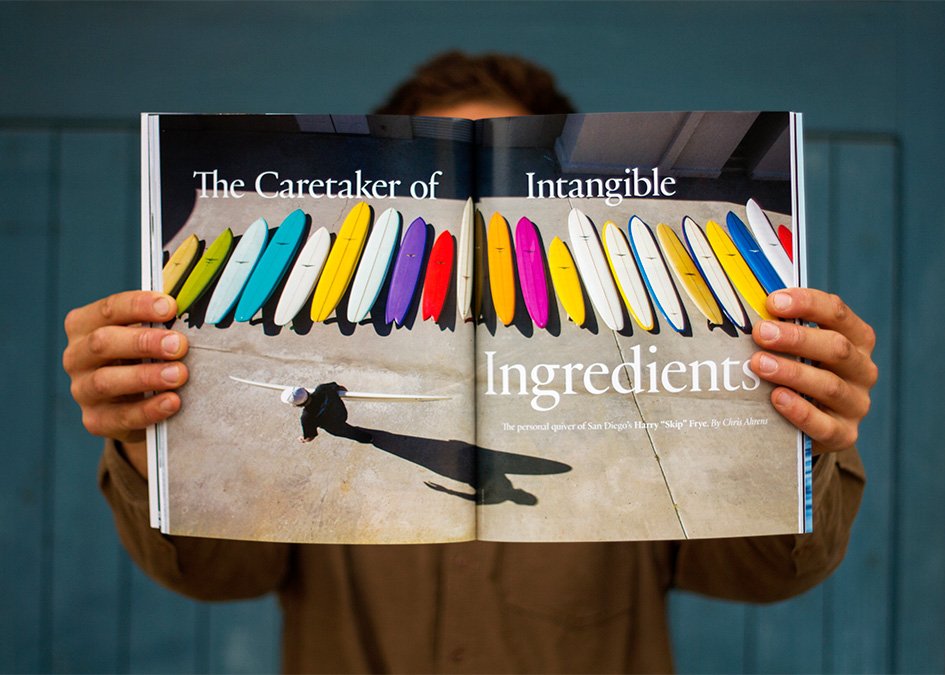 Spread from The Surfer’s Journal 26.4, which features a wonderful article about Skip with a breakdown of each of his most famous shapes.  If you ask really nicely, we may be able to order in a back-issue for you.

“Frye’s influence on surfing transcends many levels. And it could be argued that surfboard design in the USA progressed largely because of his innovation in the shaping bay. A smooth, polished surfer, Frye was renowned as a ‘master of the undervalued art of trim – finding and holding a pure angle in the fastest part of the wave. His roots run deep…”

Skip shaped surfboards for G&S until 1986, although he did leave them for a spell to shape under his own name between the mid-seventies and 1981. He met his wife Donna in 1980. Upon leaving G&S Skip and Donna started Skip Frye Surfboards and worked out of Diamond Glassing for two years before moving to dedicated premises attached to Windansea Surf Shop in Pacific Beach. At the end of 1991 they teamed up with Skip’s friend Hank Warner to open Harry’s Surf Shop (both of them, as well as their fathers and Hank and Donna’s grandfathers had been named Harry) where both Skip and Hank shaped boards under their own labels. Harry’s flourished for almost a decade until being evicted from its prime beachfront location to make way for a hotel development. During this time Skip and Donna founded an environmental group called Surfers Tired of Pollution (STOP), and to this day Skip still keeps a litter-picker and bags in his car so that he can clean the beach when he checks the surf on an almost daily basis.

“Where else do you see your local legend, picking up trash off the beach?”

In 2000, Skip and Donna moved Skip Frye Surfboards slightly inland to its current location (Hank Warner went back to work at Diamond Glassing) from where he still shapes his highly sought-after surfboards and answers the phone with his characteristic “How are the waves?” question. The process of getting a Skip Frye Surfboard is difficult (if not impossible) and has become part of surf culture’s folklore; Skip has no computer or filing system and writes orders onto sticky post-it notes. He shapes surfboards as-and-when he feels like it (and as dictated by the waves) and the orders that he fulfils depend upon what sort of surfboard he wants to shape that day. The post-it notes get shuffled around and re-ordered, and those lucky enough to place an order with him (usually achieved through a personal connection) could wait a matter of weeks if they’re lucky, or months and months if Skip hasn’t felt like shaping whatever model they’ve ordered in a while. And that’s just fine by everyone involved; Skip is an icon in the world of surfing and surfboard shaping, and his creations are so in-demand that waiting in line (a somewhat morphing line) for one is a small price to pay.

“I never thought of myself as anybody other than just another human being, as far as surfing goes. I’ve always loved surfing, and being around it.”

There’s plenty of inspiration that we can and do draw from Harry ‘Skip’ Frye: his beautifully foiled surfboards, his pursuit of trim and glide, his devotion to design and the refinements that he has made to the classic fish, his commitment to surfing regularly, his humility, and finally the fact that he gives back in so many ways but not least of which through the simple act of picking litter off the beach.  That is quite the list and we thank you, Skip. 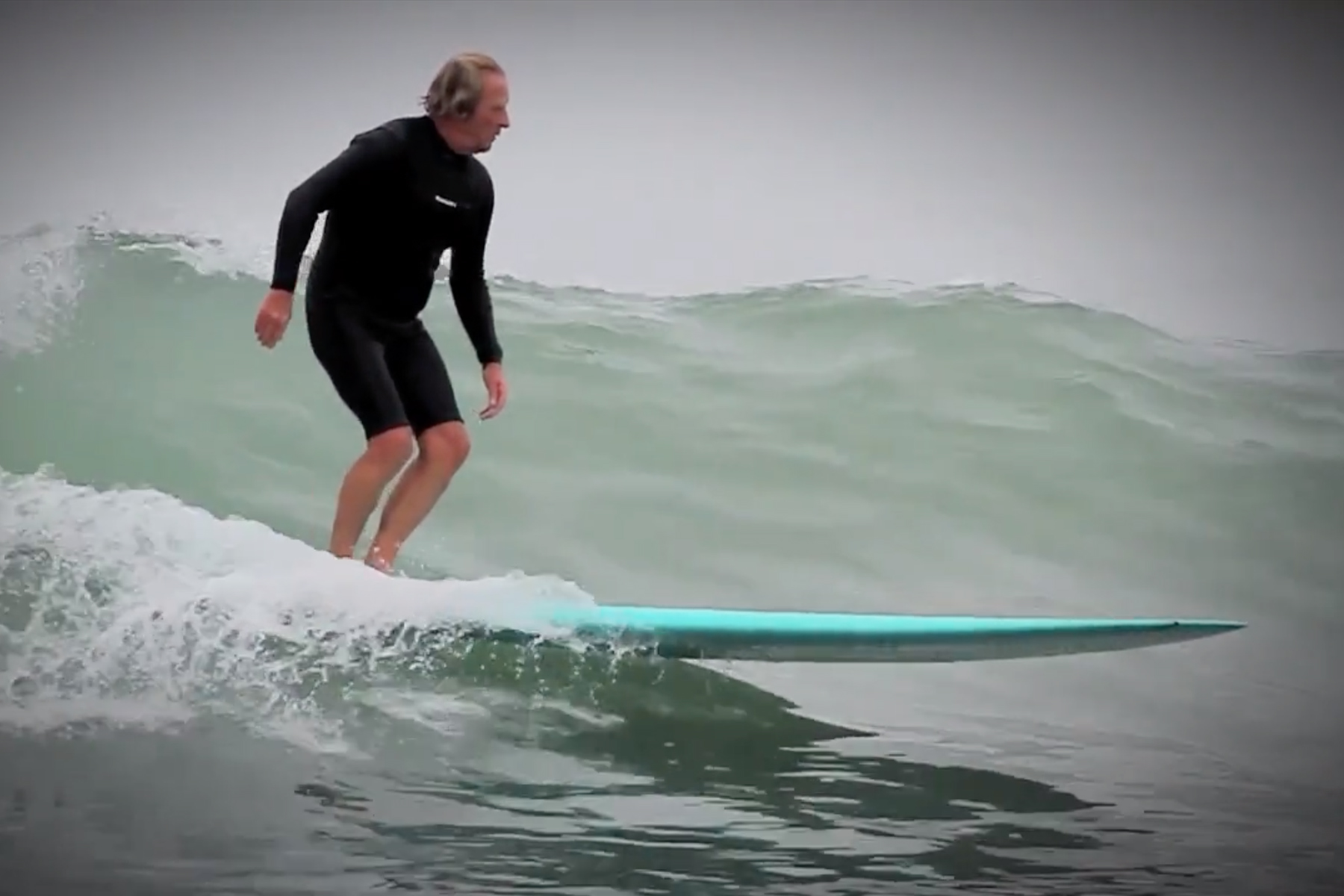 For more about Skip, check out the biography on his website or his entry on the fantastic Encyclopedia of Surfing (which is well worth subscribing to, if you don’t already). 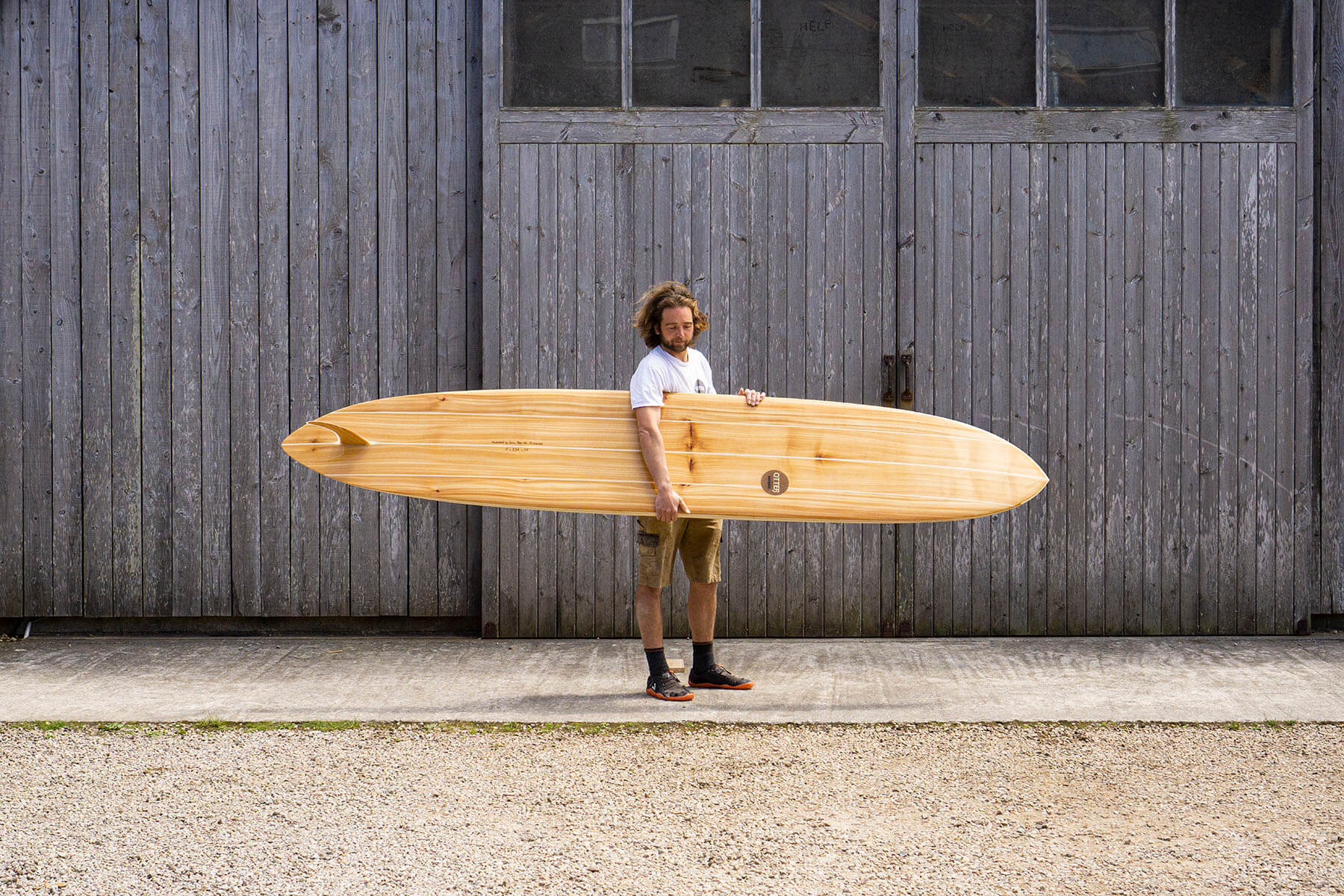 Last year we received a call from Mike at Birkenstock, asking us if we would like to make a wooden surfboard for them and collaborate on a film, safe...