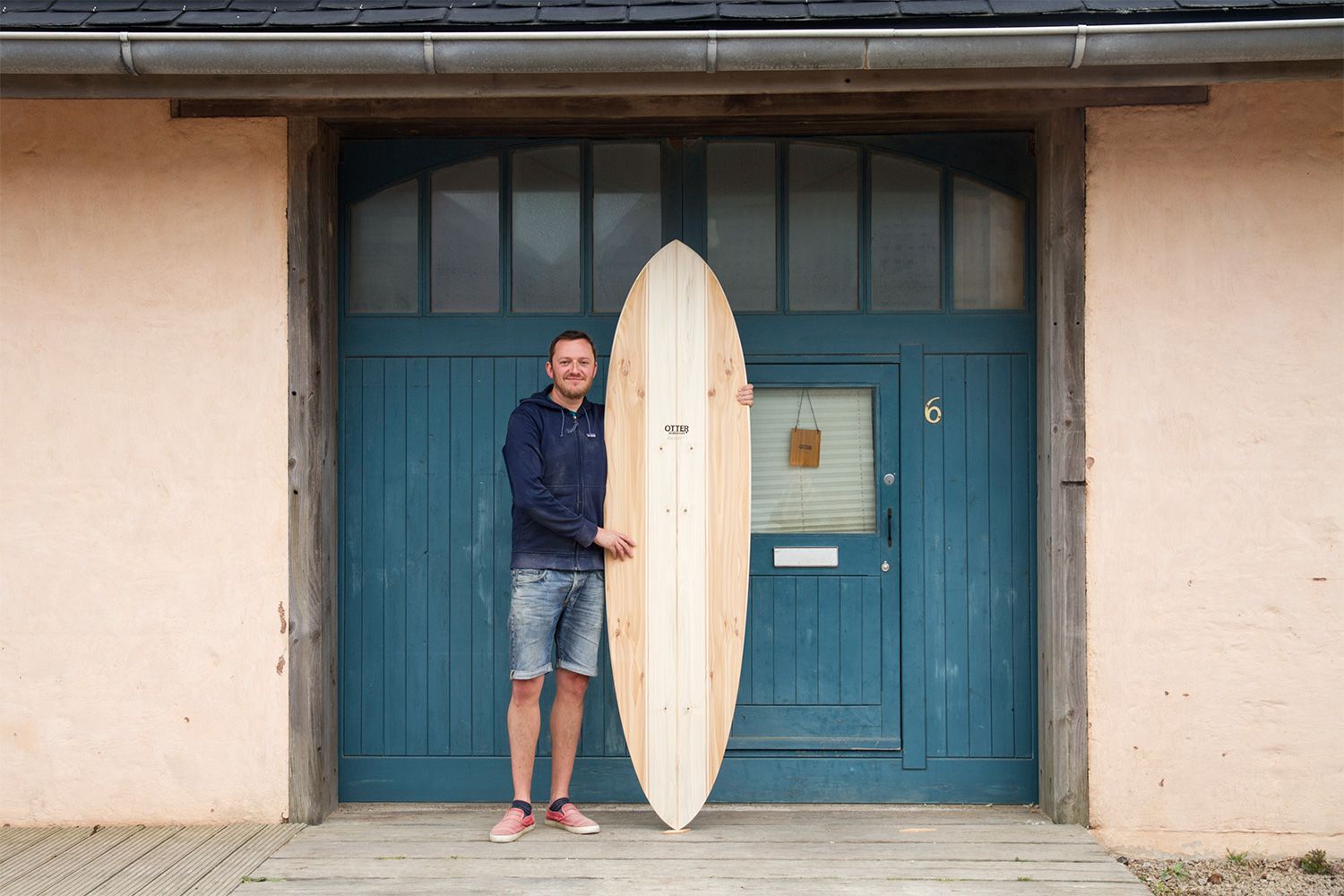 The Surfboard By Dan Kieran

In the summer of 2016 best-selling author (The Idles Traveller, Crap Towns, Three Men in a Float) and CEO of Unbound publishers, Dan Kieran, joined us for a week and made himself a beautiful 7’2” Coaster. At the time, Dan had no intention of using his experience making a wooden surfboard in Cornwall as the basis for his next book, however in the end it provided the perfect parallel against which he could compare his experience of founding and growing Unbound, and The Surfboard became his next book. A year and a half since signing his name on his newly finished surfboard, Dan is now going through his company’s unique crowdfunding process to publish this book. We’re excited to finally be able to share the news of his forthcoming book with you all, and managed to catch up with Dan in between running a company and promoting a new book, to ask him some questions about The Surfboard:

Why a wooden surfboard?

I had no idea I would make a wooden surfboard, I can’t even surf, so spending a week with James making one was a slightly odd thing to do. I met James at the Do Lectures, he was doing workshops there and I had been invited to do a talk about Unbound (the company I run) and I couldn’t take my eyes of the board he was holding. It wasn’t until I had stared at it for a while that I realised there was a man holding it and he was laughing at me. We hit it off straight away. For many years I have been fascinated by people who make things. There is something that happens in the act of making. Some objects just speak to you for reasons you can’t explain. It’s like the Universe has contrived to create the conditions for something perfect to be made. Not many things you encounter in the world have this feeling but many do. The thing that makes it ‘perfect’ is not in the materials its made from, nor the plans it was built using. Something in the act of it being made is what gives it this extra thing. The Germans have a word for this feeling, Spielzeug. It’s their word for a toy but it has this other meaning we have no word for in English. I’d been obsessed by this idea for a long time. Then I saw it in James’s board and realised he, and people like him, were surely the answer. He must be putting that feeling in his boards in some way.

Was this the original premise for your next book, or did the idea develop out of something else?

No, my original plan was to go out into the world trying to find objects that had this feeling and to talk to people about the objects they felt contained it. I was going to make people hold them while lying in an MRI scanner to see what part of their brains were activated by it. But quickly it became about luxury brands. I tried to go to the Rolls Royce factory, I wanted to go to the workshop where Martin and Co guitars are made. But this felt like a cul-de-sac. That would have been a book about how effectively we commoditise this feeling, but marketing and advertising manipulate people into thinking it is ‘in’ things that don’t contain it. A friend of mine does semiotic analysis for brands and he said that was his job – to persuade people this feeling is in things that don’t contain it. I didn’t want it to become a book about marketing and advertising. But by now Unbound had started to take off and I had no time to think about the book I was trying to write.

Was it relatively easy to draw comparisons between spending a week making a wooden surfboard, and spending six years building a new business on a new and unproven model?

It happened by accident. I was a bit lost at work and needed to get away. I remembered James saying I could build one of his boards and while I didn’t believe I was capable of doing it there was something about trying to do it that appealed to me. A week in a tent with no mobile phone or electricity was a nice prospect too. It was only in the workshop that I began to see the parallels. I was proving to myself I could make something with spielzeug and what that meant. I’m a travel writer, I do slow travel where the joy is the journey as much as your destination. I love inhabiting the space where your mind goes when you are inbetween points A and points B. The place I went to in my mind inbetween starting and finishing building a surfboard was an epiphany. I began to realise I was on a journey of personal growth and reflection while running my company. The more I constructed the board, the more I was able to deconstruct what was going on in my mind about my life as a whole.

Where is your surfboard now?

It’s at work. There is something wonderful about having it there, although it will go on the wall at home soon.

What does it represent for you?

It shows me that I can go beyond the preconception I have of what I think I can do, which is an incredibly important thing to believe about yourself whatever job you do but especially running a company. William Blake called it our ‘mind forg’d manacles’. I think we have all put limitations on ourselves, I realised the ones I had always placed on myself did not have to be defining by building a surfboard I still have never used.

Yes! They were very nice about it but because of the terrorist threat etc…

You can read an excerpt from The Surfboard, watch a short film about Dan’s week with us (produced here at the workshop by our friend and go-to filmmaker Al Bendall of Tiny Dog), and pledge towards the book’s publication (from a £20 pledge for a limited edition hardback), over on the Unbound website:

Edit – This book is now available on our website here.