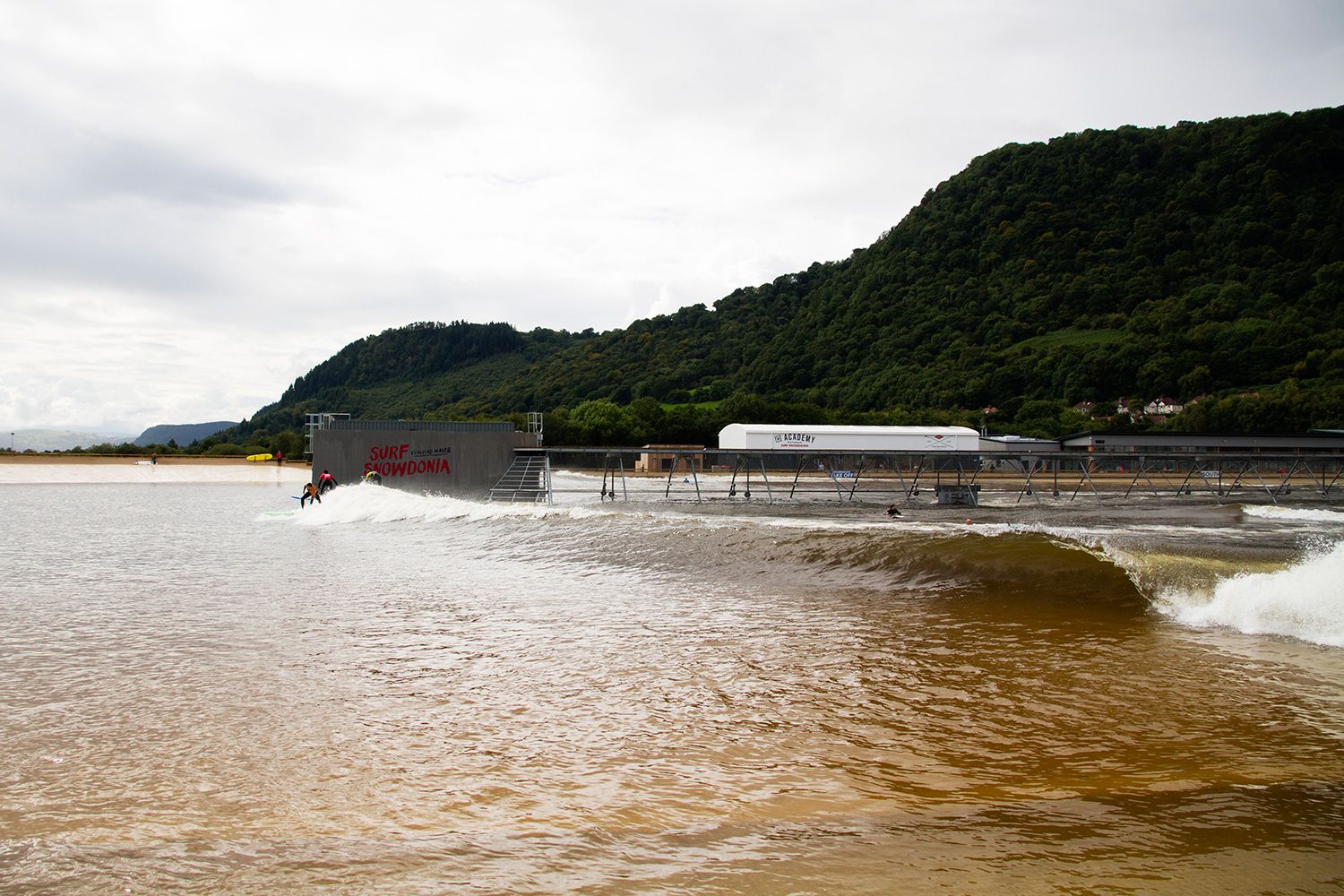 ​We’re excited to share with you this week the news that, this spring, we’ll be heading up to Surf Snowdonia in North Wales to run a week-long “Make Your Own” wooden surfboard course. We’ve put together a package with the team at Surf Snowdonia that includes five nights bed and breakfast, staying in the wooden camping pods on the shoreline of their lagoon and eating in their onsite restaurant, with five one-hour sessions on the wave included so that you can wash off the sawdust at the end of each day. One of the surf sessions will be saved for when you collect your finished board, so you can catch your first few waves on it just metres away from where you made it. 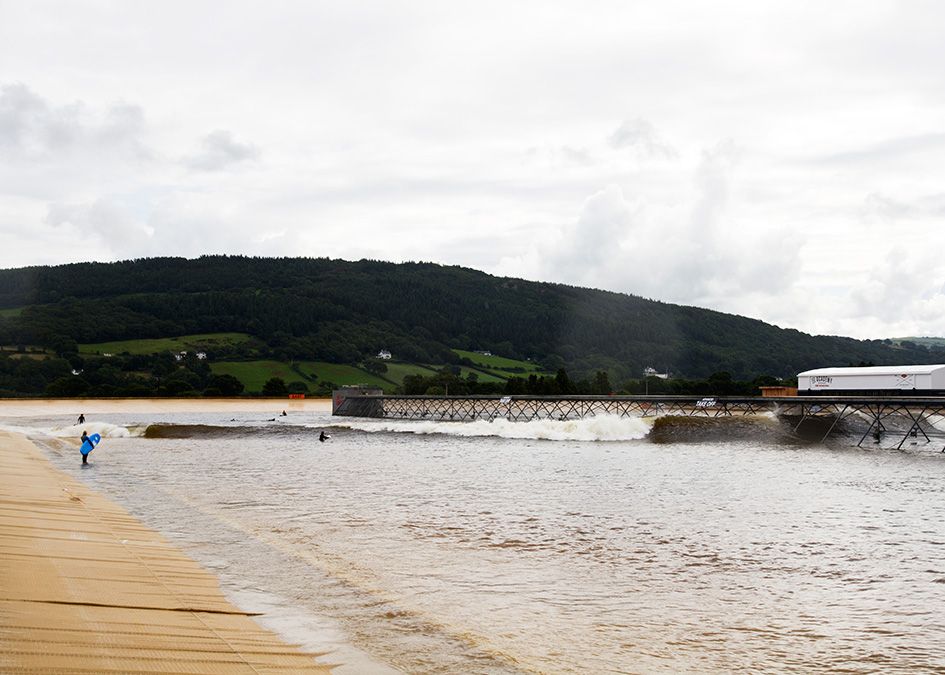 We’ll be setting up shop in a marquee next to the camping pods on the other side of the lagoon to the main complex, so we’ll have a bit of peace and quiet and will be able to shape, surf and sleep without having to move very far at all. The marquee will have space for three workshoppers, and we’ll have brought the contents of our workshop along in the van so that we can recreate its unique atmosphere in North Wales. We’ll also bring some of our wooden demo boards for attendees to surf on the artificial wave at the end of each day’s making. Just as with the courses that we run here in Cornwall, at the end of the five day course we’ll take your new pride and joy away to be laminated, and then we’ll return it to Surf Snowdonia by mid-July for you to collect (and surf for the first time) there. 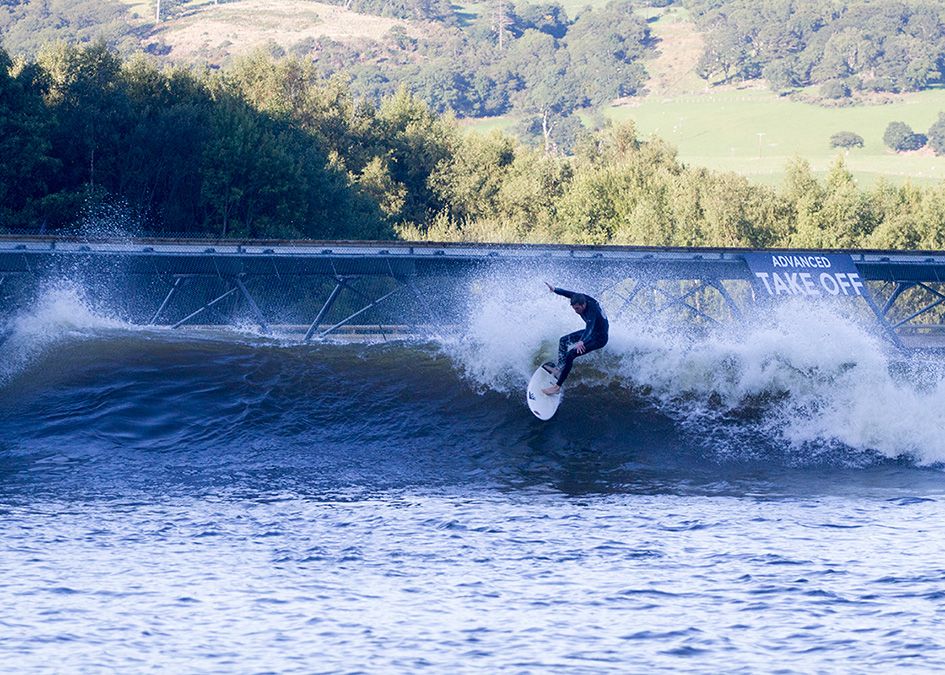 Our Mat visited Surf Snowdonia at the end of last summer and borrowed a surfboard from their hire centre to catch a few waves on.

If you’re interested in joining us at Surf Snowdonia then booking is just the same as for our other workshop courses – you simply have to select the week of April 25th labeled “at Surf Snowdonia” before going on to select the model of surfboard that you’d like to make, your wood lay-up, and any additional extras. If you’ve got any questions about this particular course then please don’t hesitate to drop us a line here, by phone or e-mail, and we’ll be happy to answer them. 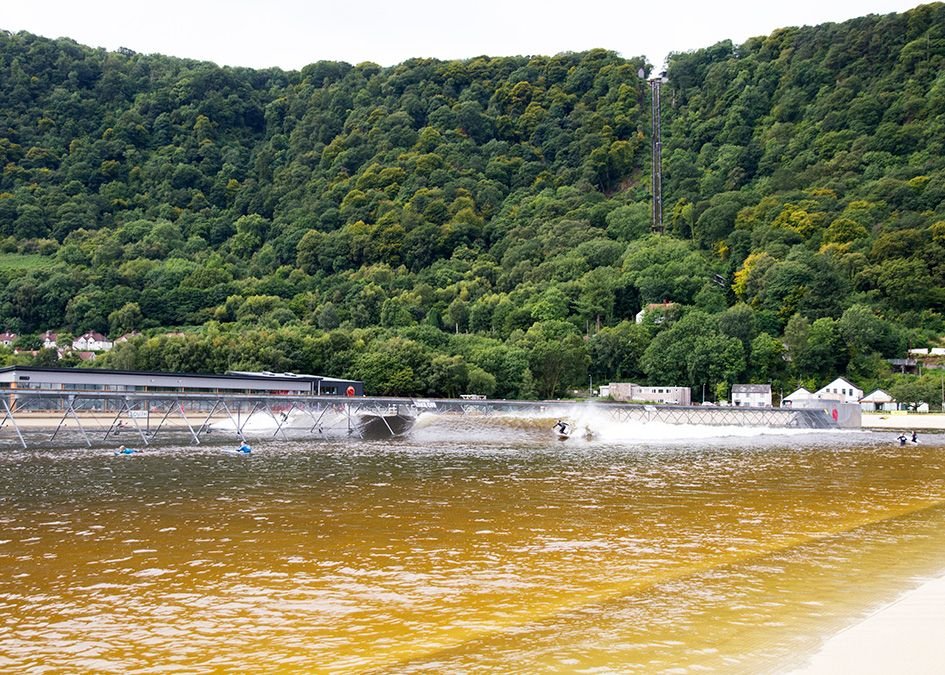 Surf Snowdonia is the first Wavegarden artificial wave lagoon open to the public. It was built on the site of a former aluminium works in Dolgarrog, North Wales, next door to a hydroelectric plant that generates power for 20,000 homes in surrounding communities. 85% of the stone required to construct Surf Snowdonia (25,000 cubic metres of it) was cleared from the site then crushed and reused, along with 400 tonnes of steel, cast iron and copper. The water that fills the lagoon is rainwater that comes from reservoirs in the Snowdonia Mountains, being piped down the hillside and first passing through the hydro plant to generate the electricity that powers the wave-making machinery. The water is brown, but it’s clean; UV disinfection and a two-stage filter is used rather than chemicals, allowing the lagoon to be emptied directly into the river Conwy.

Whilst Surf Snowdonia is an artificial wave, we believe that the team behind it have done their best to create something that not only minimises its potential impact upon the environment but attempts to improve it by regenerating a brown field site. We know that for many people Cornwall is a long way to travel to attend a workshop course with us, and hope that by taking our workshop on the road it will perhaps be more accessible to some.