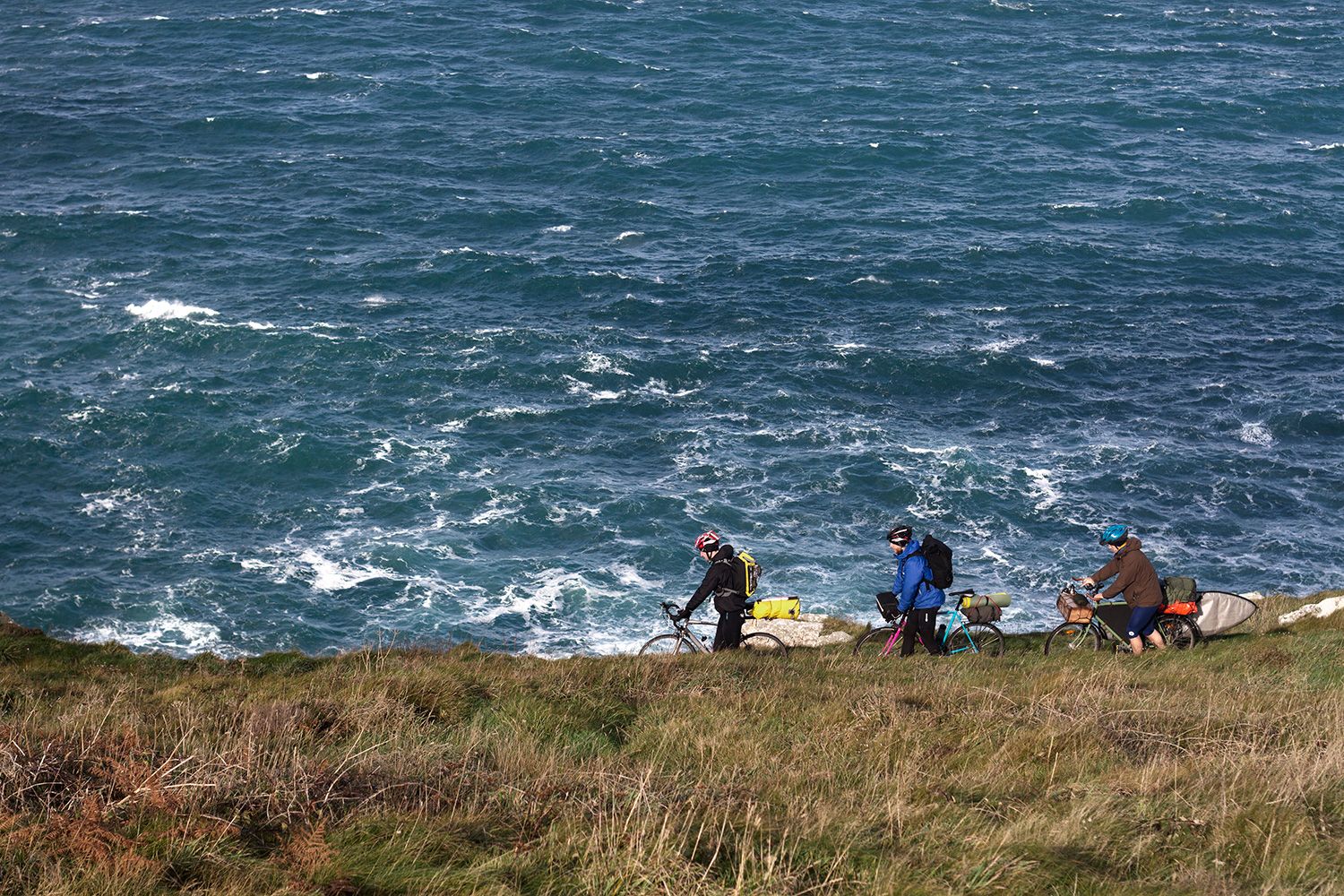 ​In the first week of November last year, just as the temperatures really dropped and winter announced its arrival, we took a few days off to head out on a microadventure with some friends. James and Mat were joined by Will Meyer and Rob Craig (Will being one of the siblings behind London based Brother Cycles), and the plan was to spend three or four days bikepacking along the coast road in the far south west, pausing along the way to bodysurf whenever and wherever they could and sleeping out under the stars in bivvy bags at night. An account of our microadventure was published in Ernest Journal at the very start of this year, and we thought that the anniversary of our trip was a perfect excuse to share James’ account of our few days of bike-camping and bodysurfing:

“I was incredibly excited by the idea of saddling up and spending a few days on the road powered only by my legs, but as the date to leave came closer apprehension began to creep in as I realised how underprepared I was. Last minute phone calls to friends who owned good road bikes with pannier set ups combined with shopping for comfortable Lycra on a shoestring budget only compounded my panic, but I always find this energy to be a great stimulant for excitement too. It was all going to be a new experience for me, and I started getting pretty giddy on the morning we left.

Packing wasn’t too much trouble as it was just essential camping gear (which tends to live in the van anyway) and then a wetsuit, swim fins and handplane. Thanks to the van, I also had multiple tie downs to allow me to strap everything onto the panniers, saving me carrying a rucksack. At the time I thought that this was a good idea!

I soon discovered that a bike with all of the weight over the back wheel doesn’t make for easy ascending on hills as the front wheel was so light on the ground that I ended up going sideways as often as I went forward…. some work on my peddling technique was needed and I quickly learned to overcome the problem – necessity being the mother of invention.

Once I got that figured out, the riding was so much fun. That extra weight meant that the downhills were pretty exhilarating and I realised how long it had been since the last time that I rode any distance on a bike…something that I used to spend days doing when I was a teenager.

I also loved the pace. It was slow enough that you could really appreciate all the things that you miss when traveling in a van and we could stop whenever we liked to take it all in and have a sip of water, yet it was fast enough that we actually covered some real distance. The freedom to check out some new surf spots by hopping off the road and wandering along the coast path was also another big bonus of traveling so light.

Over the course of our trip we had rain, wind and plenty of sun too, which made the experience and the campfires with basic food all the more rewarding. I can’t wait to do it again! It’s just such an intimate way to explore a stretch of coast that you feel you already know quite well.

I learned that even the hills I had thought would have been impossible on a fully-laden bike just needed sensible tactics, and that you don’t need to go far to have an adventure full of new experiences.

The most memorable moment for me was enjoying a stretch of long downhill with Will; We both held back from Mat and Rob so that we could see what was coming up, and then Will just told me to stay close behind him. The road was quiet so we used the whole width of it to draw some great lines for about a mile, flowing through the turns and making speed out of the environment. For me, it felt pretty close to cruising along a lovely point break wave, only we wouldn’t have had quite the same soft landing if we were to come off! Thanks for that memory Will.” 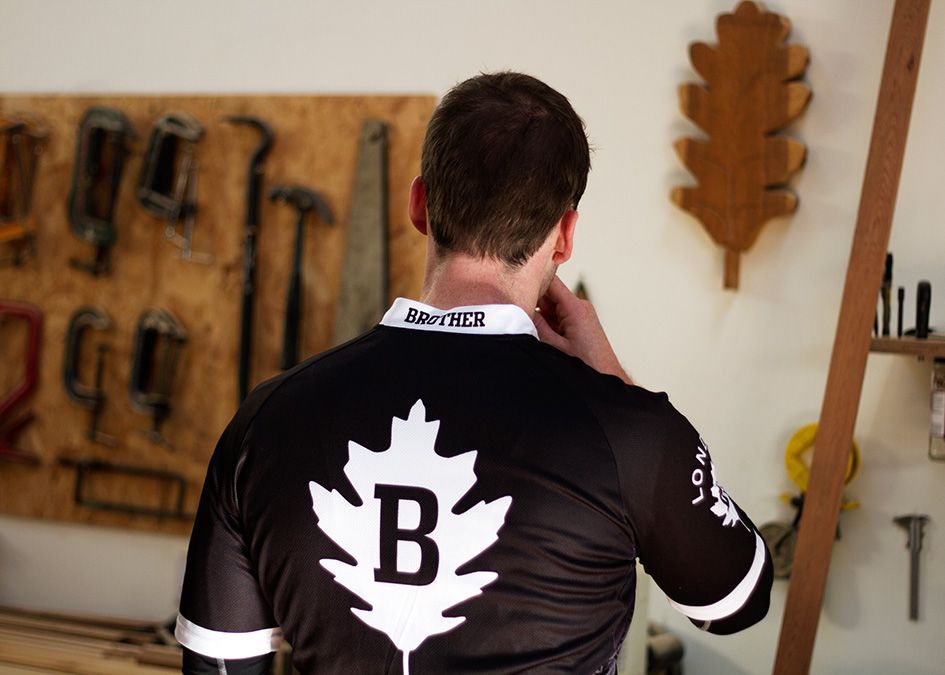 Brother Cycles’ oak leaf logo, with a wooden oak leaf given to us as a gift from an early customer hanging on the wall in the background. 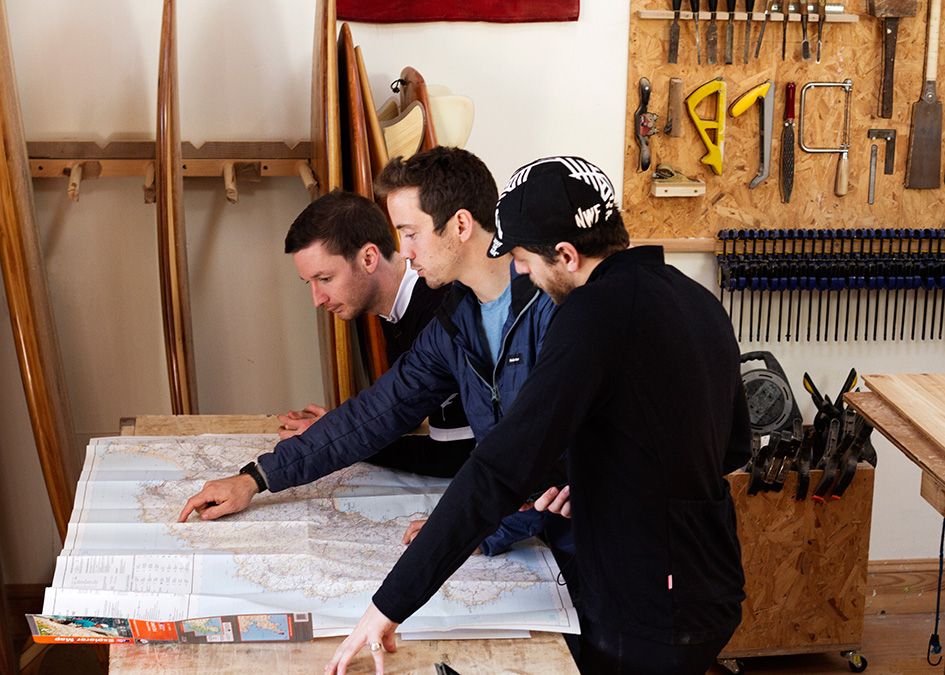 Rob, James and Will study the potential surfing and camping spots on the map and start to plan out our route. 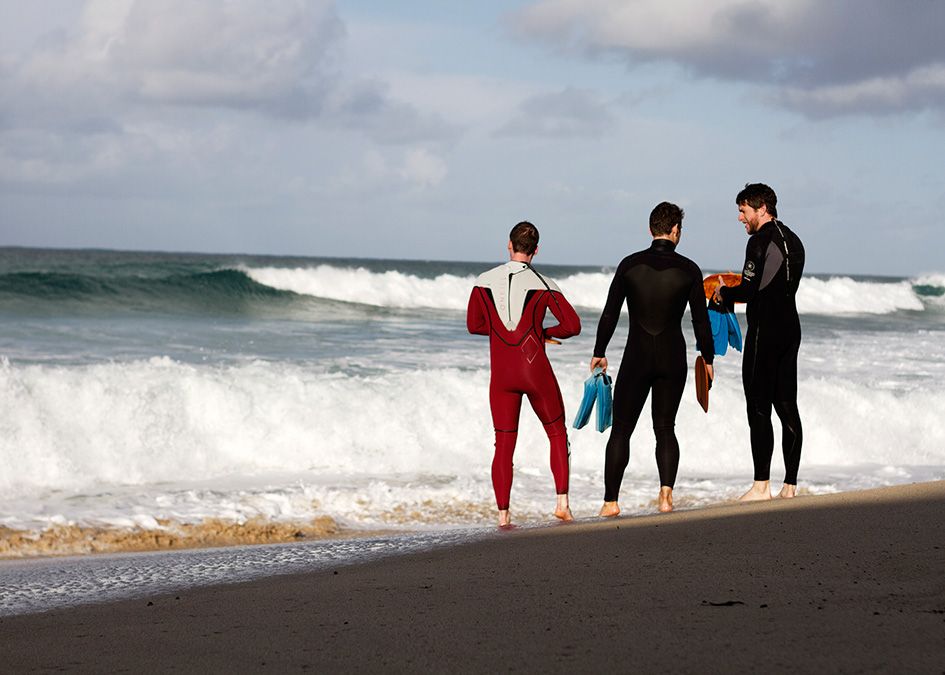 Winter sun and some fun waves near St Ives on the first afternoon of our ride. 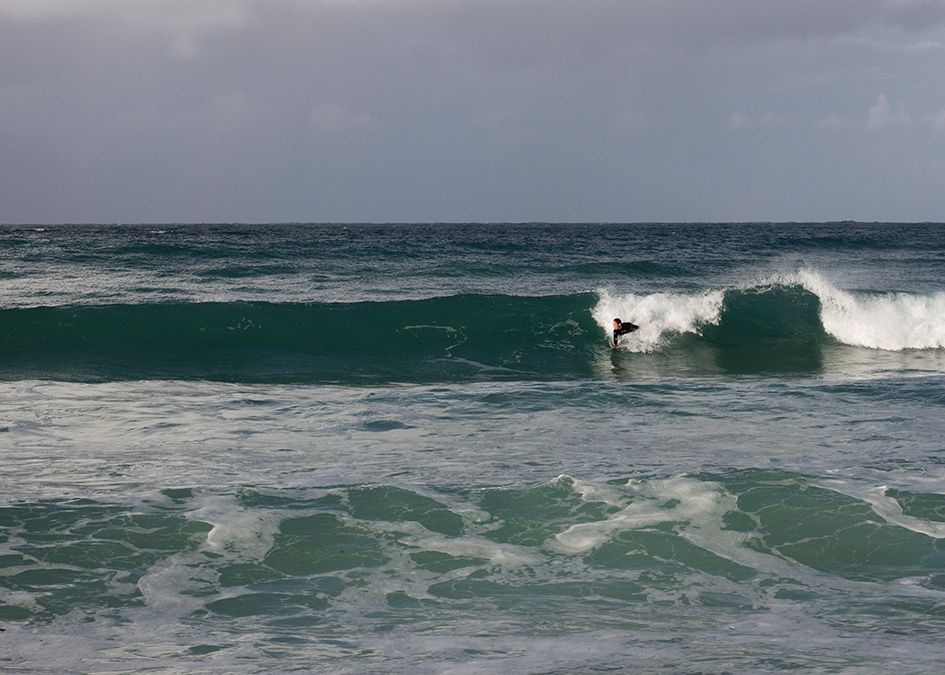 James with a nice open wall lining up ahead of him. 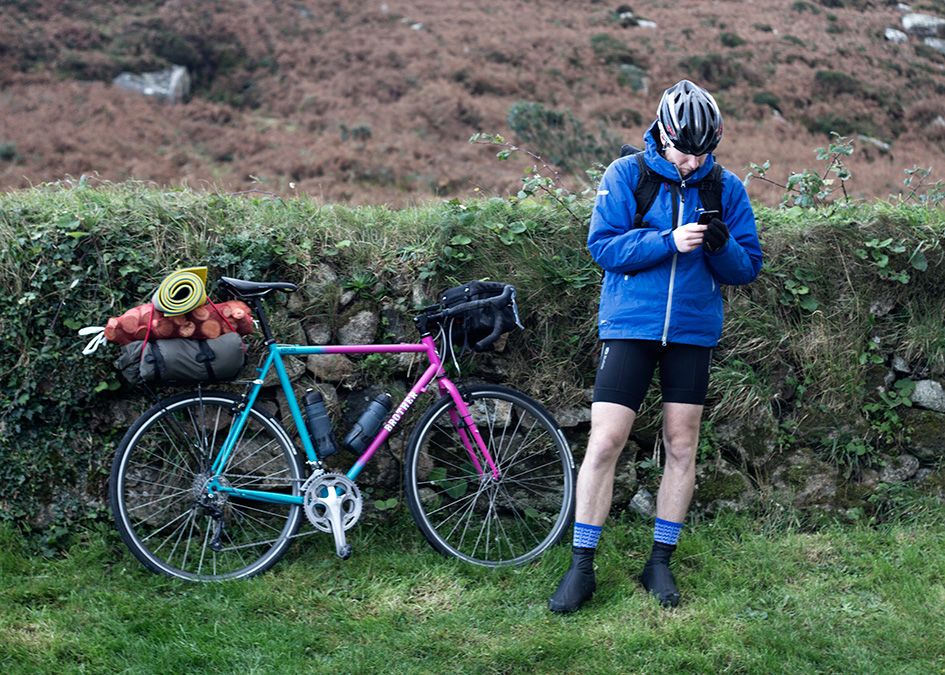 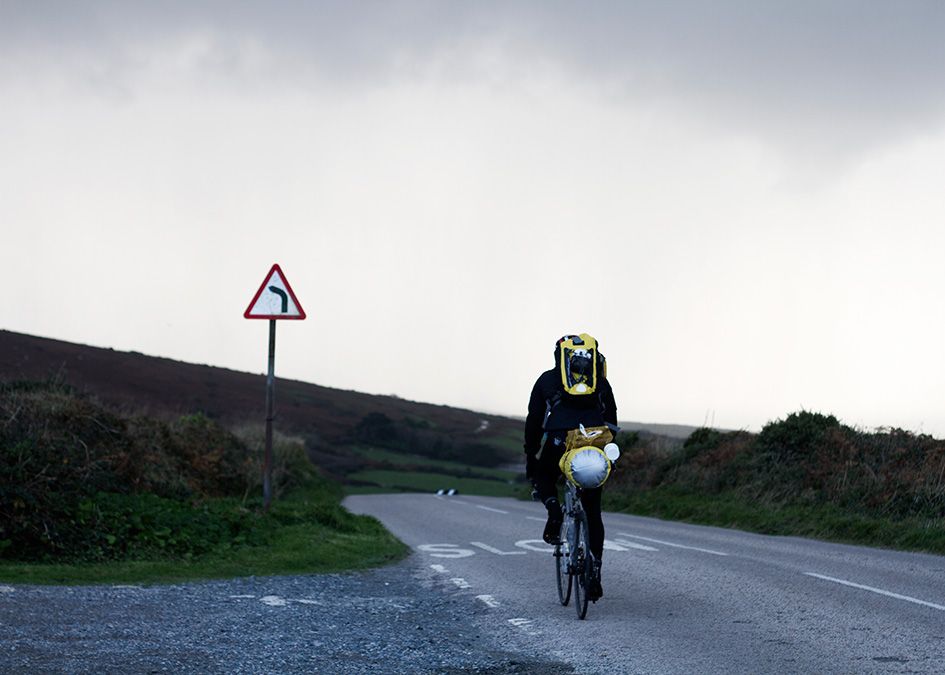 Rob rides off towards the incoming weather. 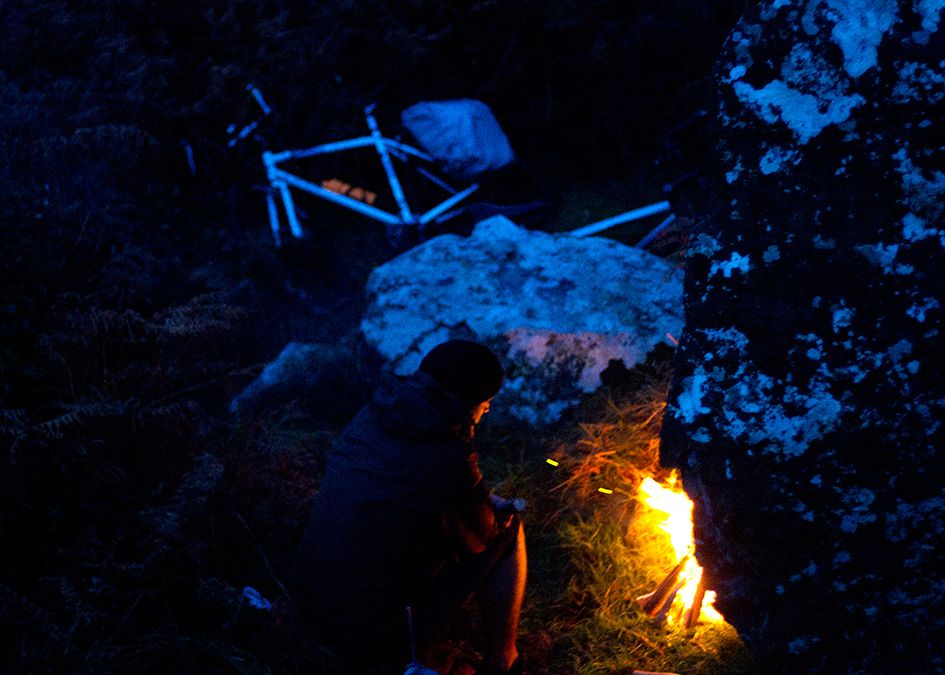 Seeking shelter from the wind and rain behind the giant granite boulders that are so numerous in Cornwall’s far west. 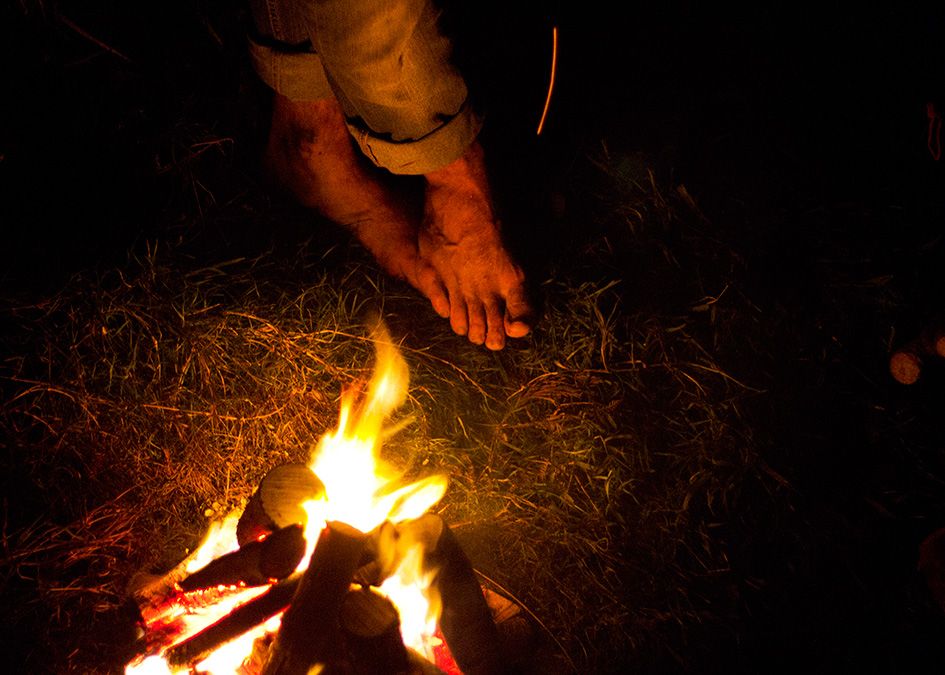 Between fins and pedalling through puddles our feet only ever dried out around the camp fire. 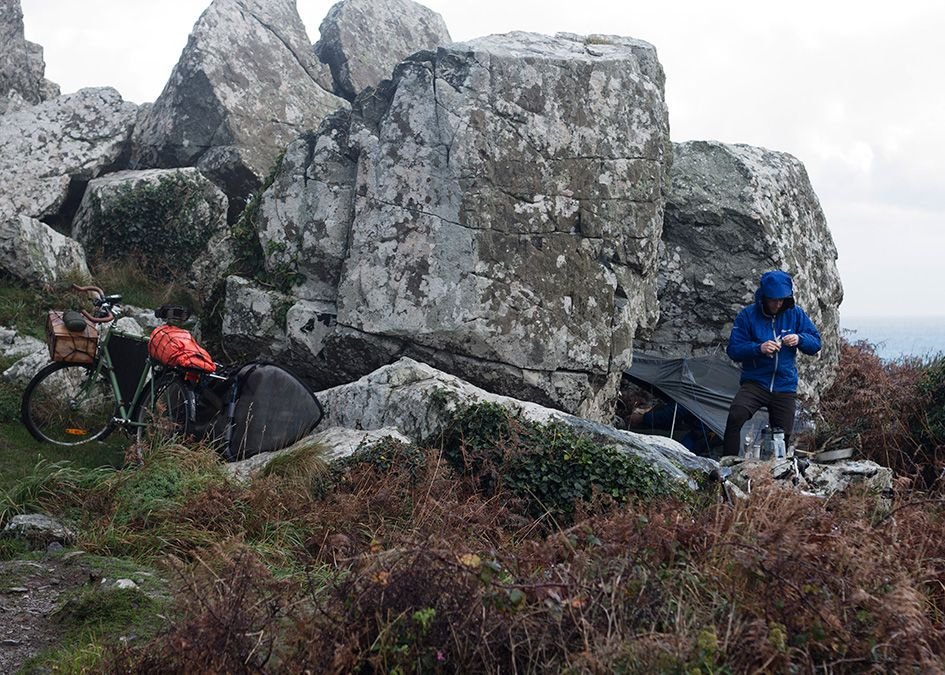 Bikes, our bivvy and coffee brewing. 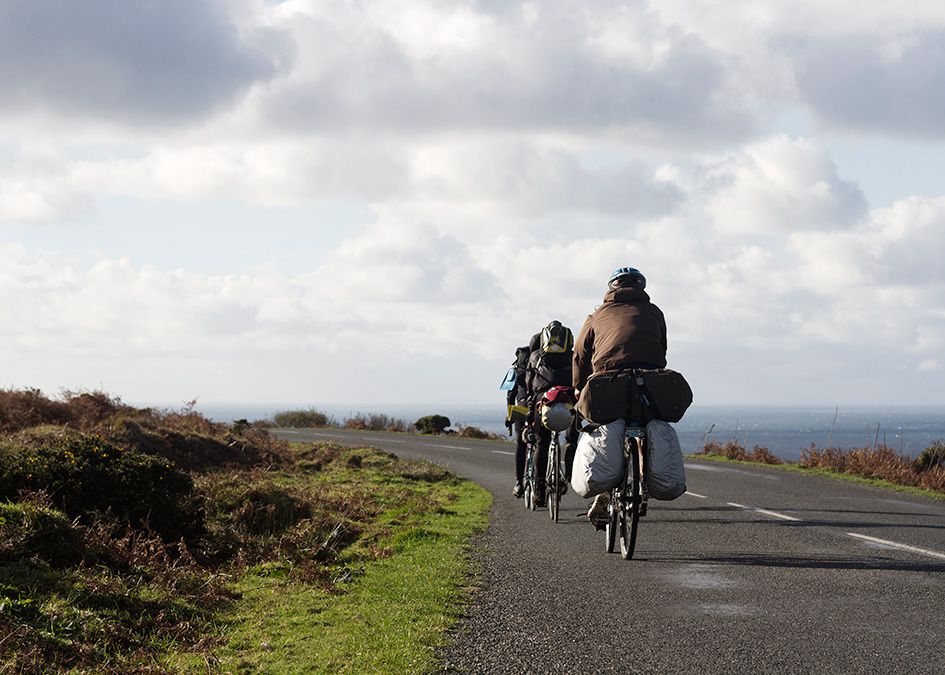 This road is nose to tail with cars and coaches in the summer. We pretty much had it to ourselves on a winter weekday. 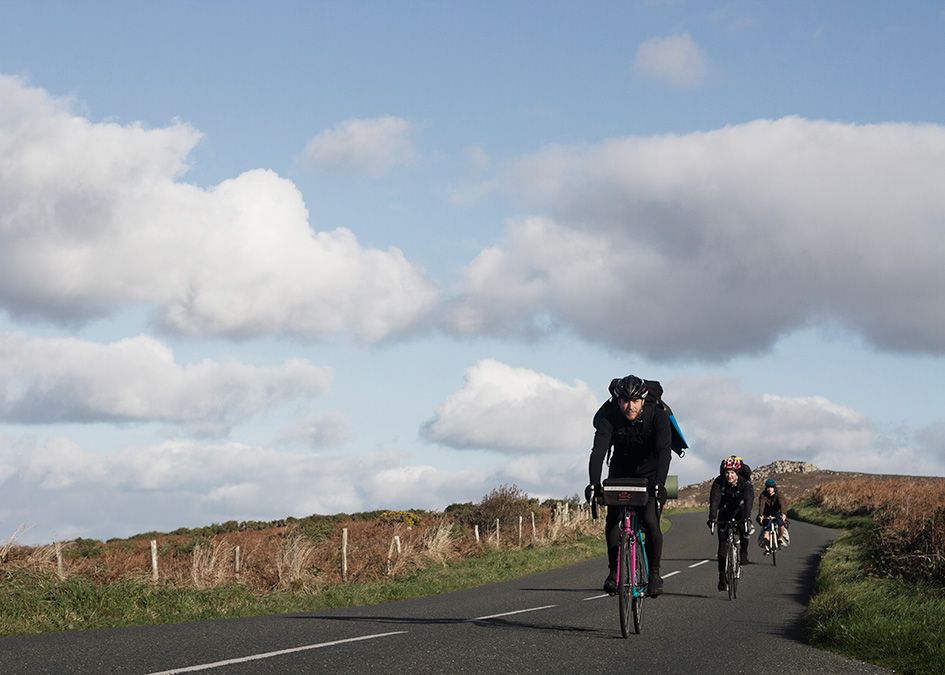 Will leading the way (with swim fins hanging off the back of his backpack) as we coasted downhill. 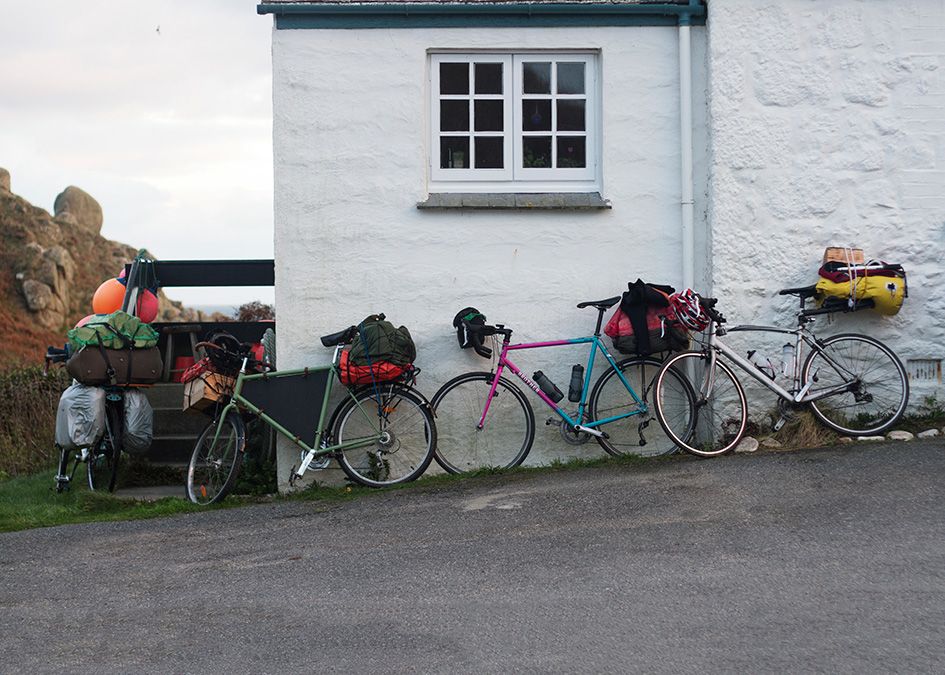 We paused fairly frequently to “adjust our loads” and summon up the energy for the next inevitable hill. 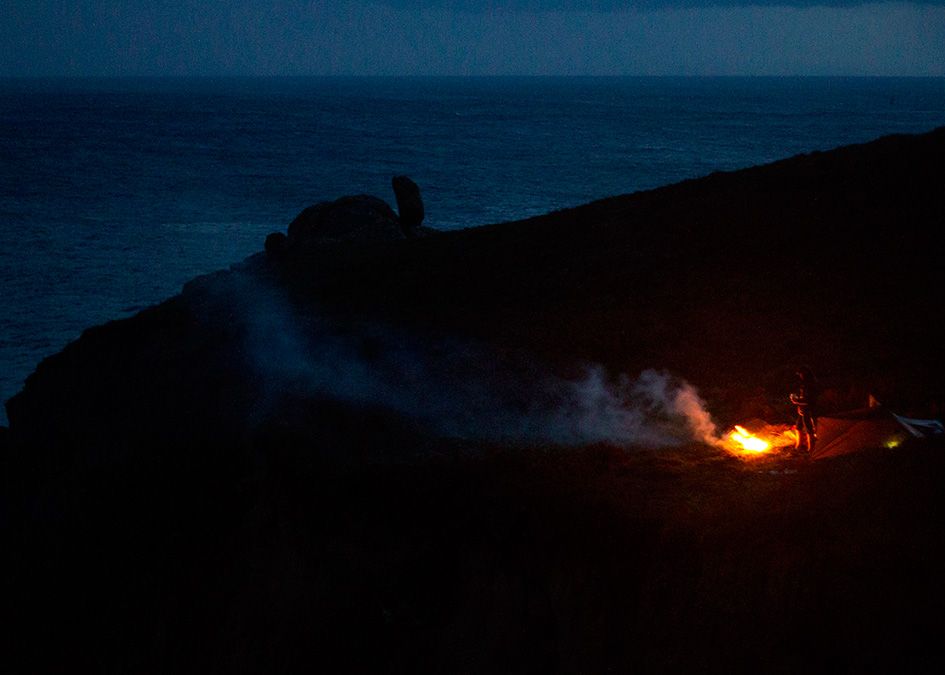 A cliff-top campfire on a remote and exposed stretch of coast. 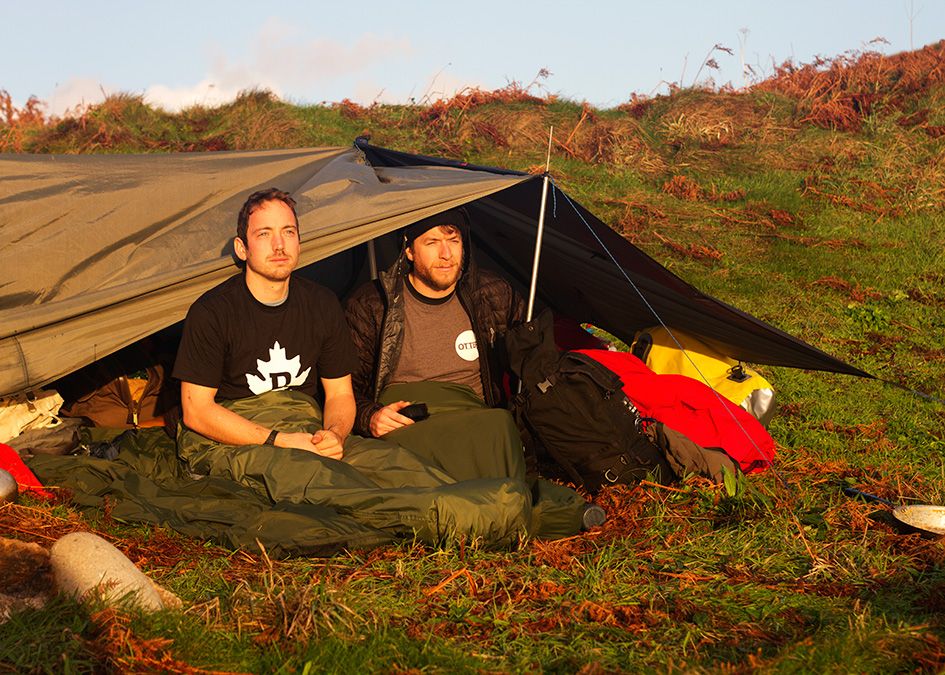 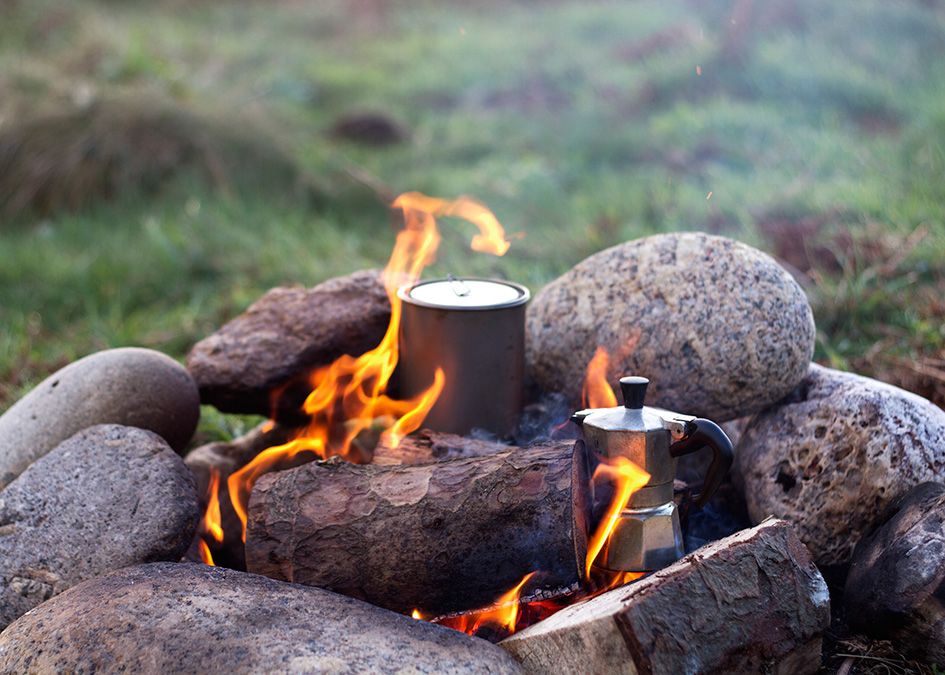 Fuelling up with coffee and porridge before another day in the saddle and in the sea. 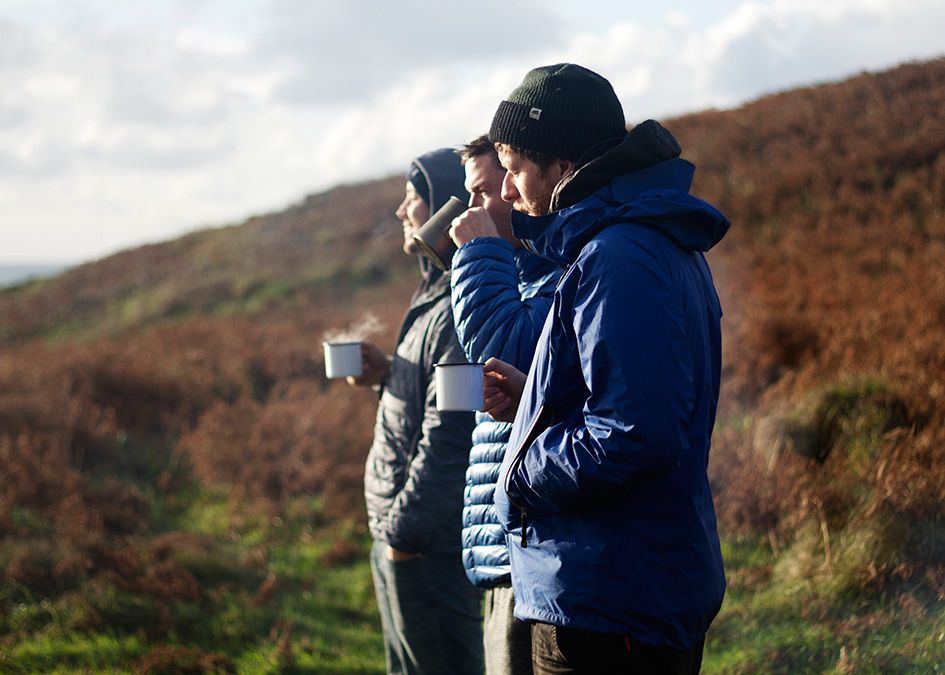 Enjoying a brief bit of sunshine between the squalls. 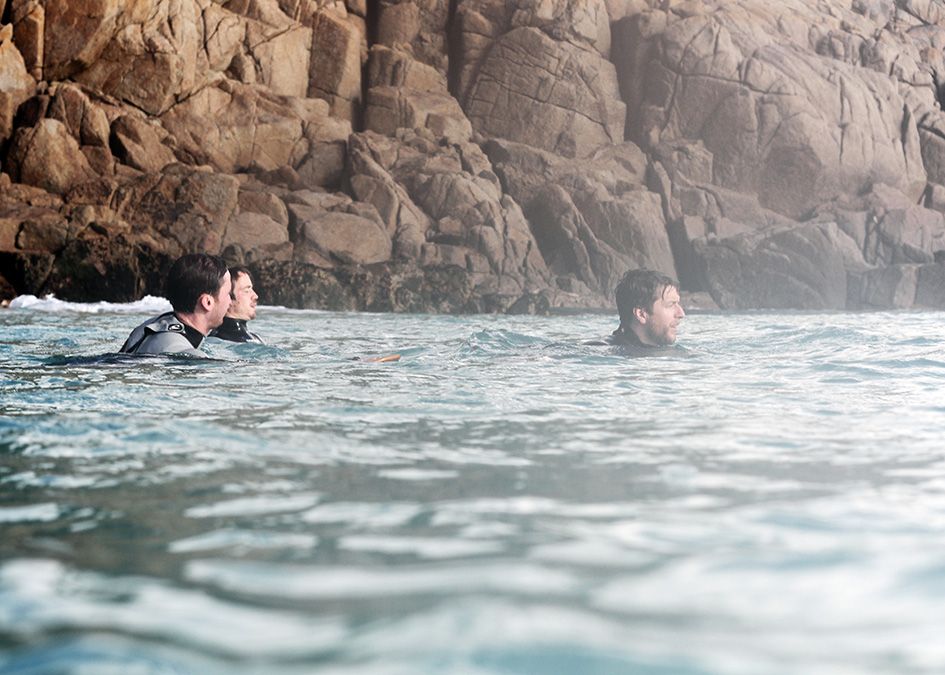 We ended up swimming into some inaccessible coves in search of some wedgy peaks to bodysurf. 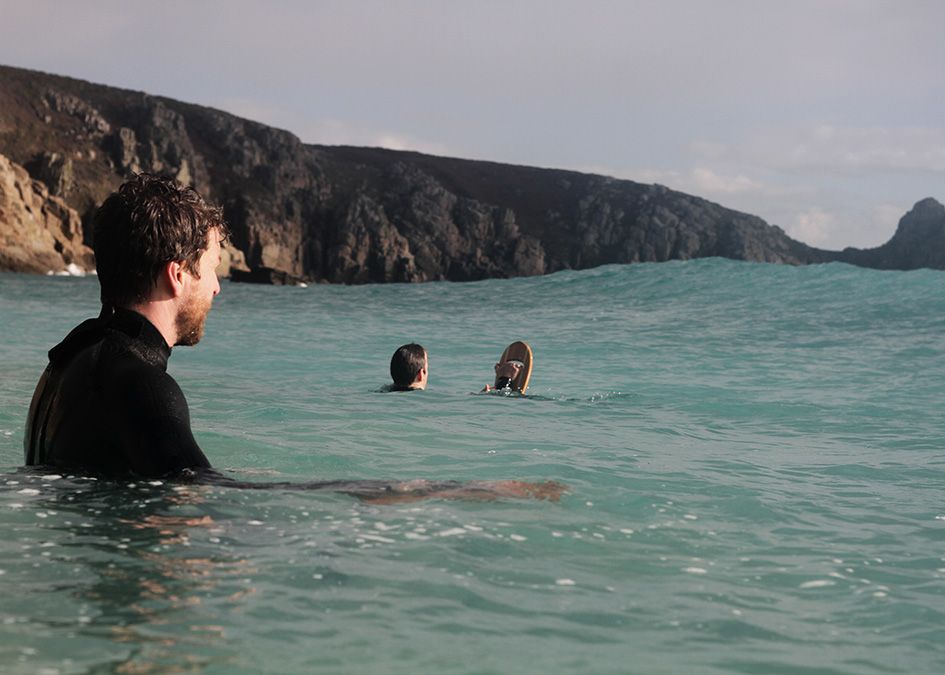 Will and James, waiting for waves. 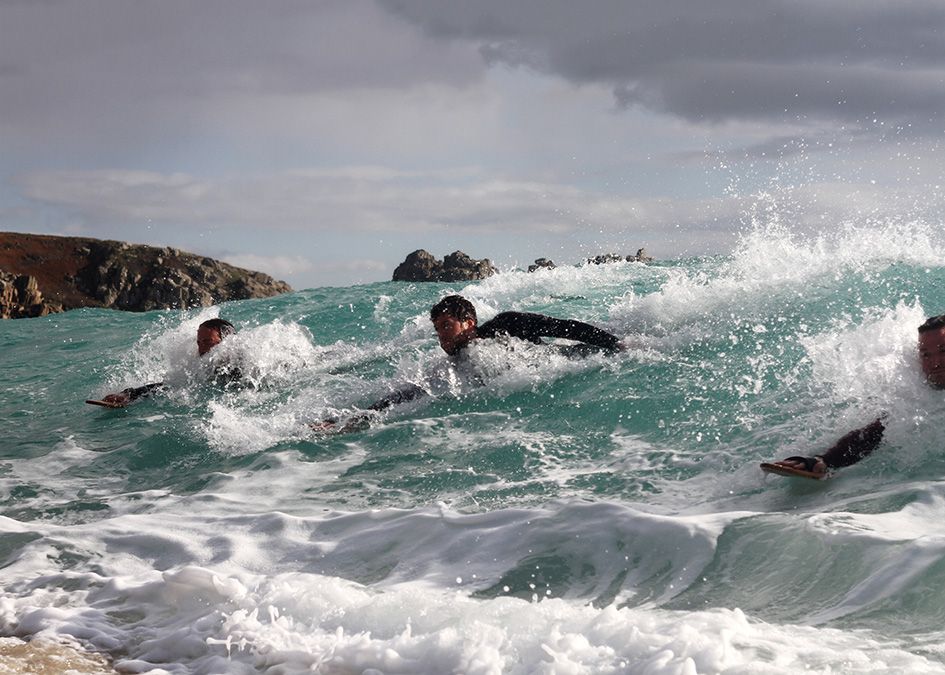 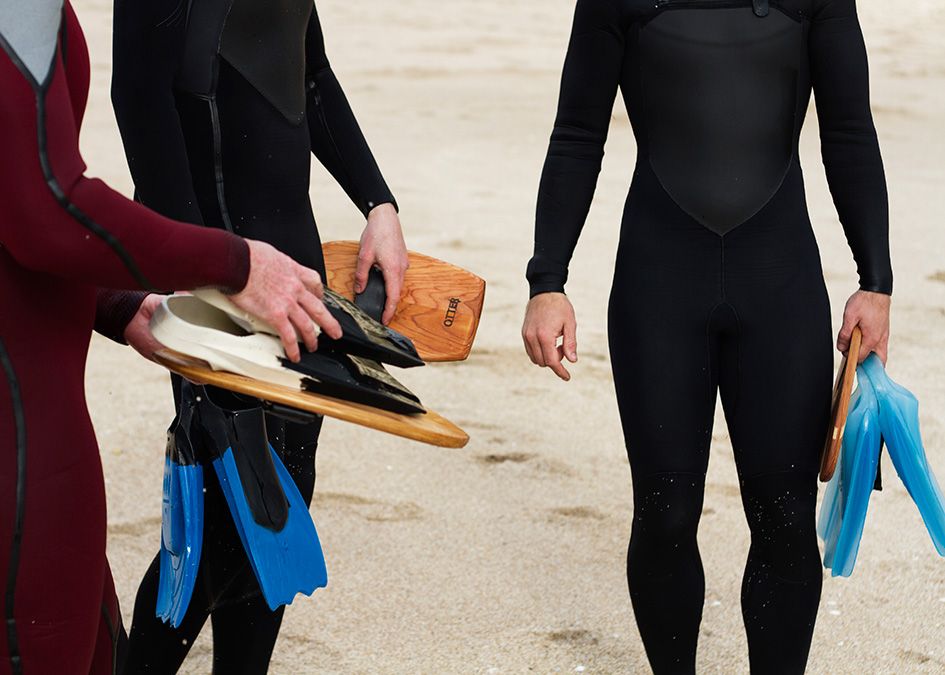 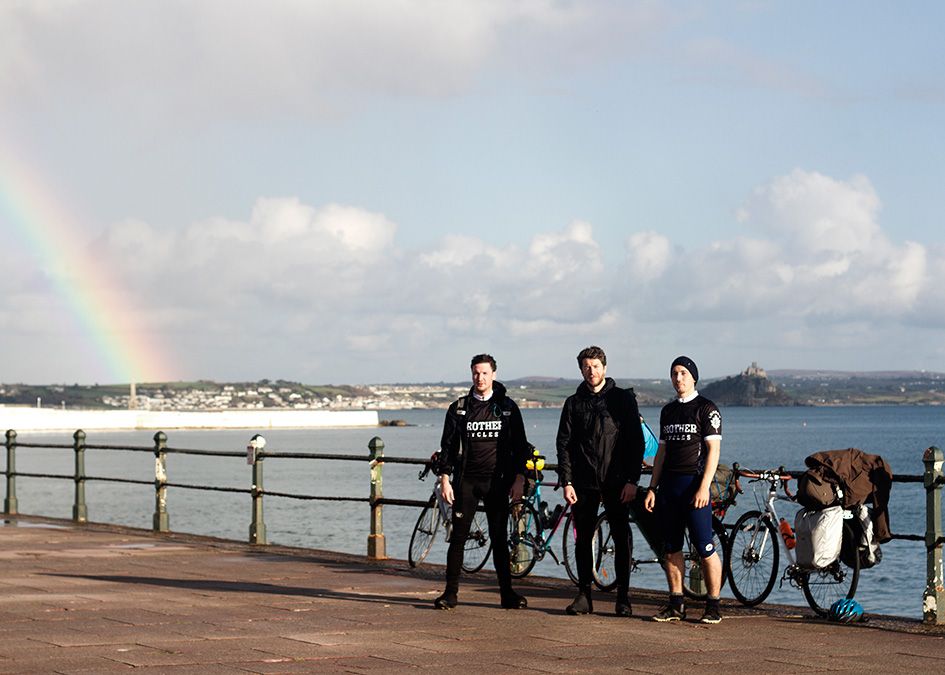 Our finish line was the train station at the end of the rainbow in Penzance – the end of the line – where Rob and Will boarded a train home to London.

If you’re interested in bike-packing then have a look at the wonderful Brother Cycles blog, which features accounts of some of the other unsupported bike-camping trips that they’ve undertaken both in the UK and further afield.