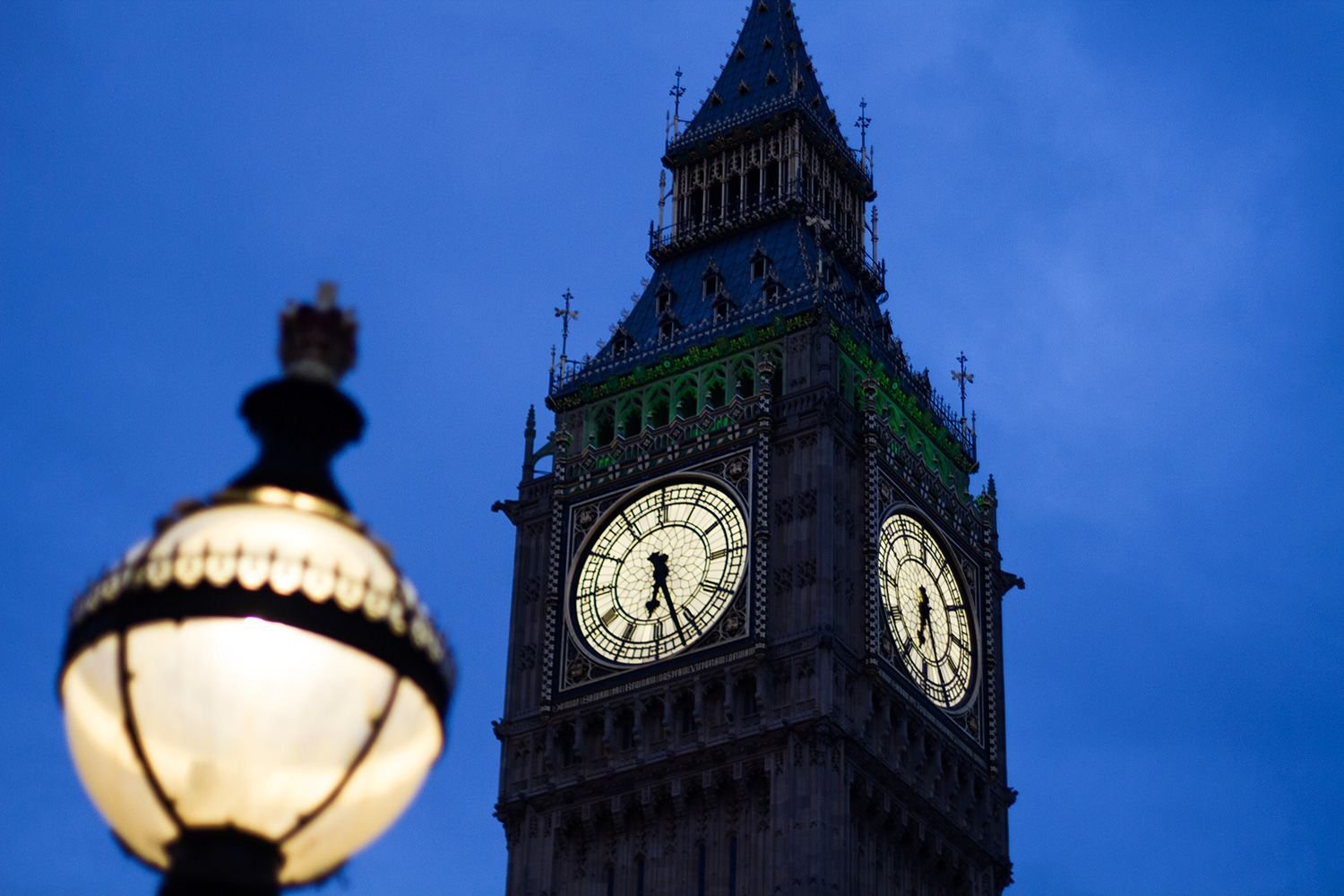 ​What a week it’s been; this time last week a coach load of surfers, including three-times world surfing champion Tom Curren, big wave surfers Greg Long, Brad Gerlach and Ramon Navarro, leaders of the enviro-surf movement, renowned surf scientists and surf industry leaders, arrived at the Bedruthan Steps Hotel just up the coast from us at Mawgan Porth for the 2015 Global Wave Conference. In the days that followed, waves were shared, relationships forged, and 48 delegates from around the world spoke about issues ranging from climate change and marine litter through to sustainability in the surf industry and the economic value of waves. 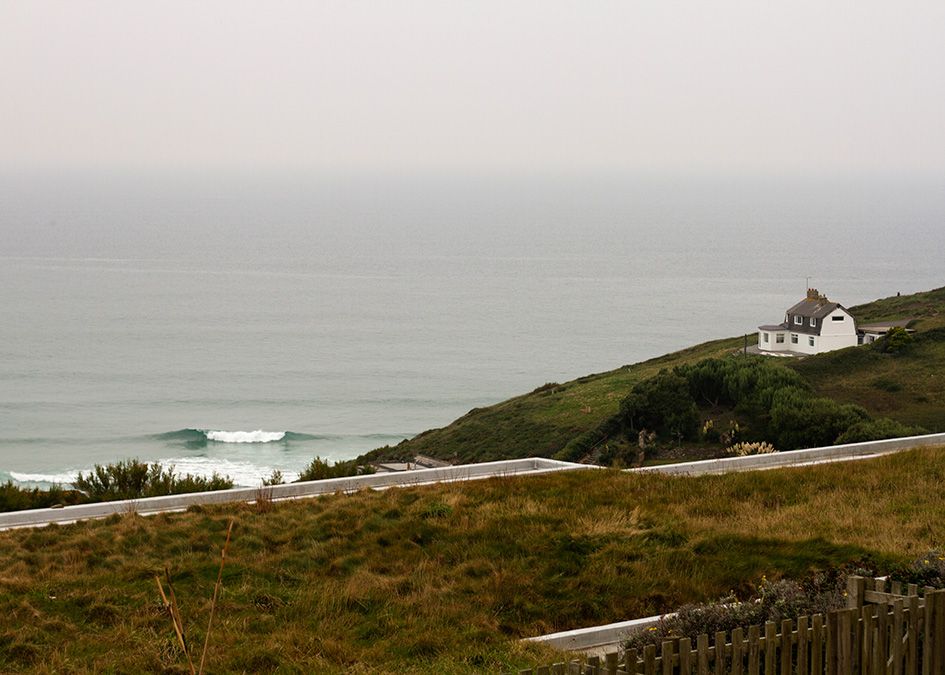 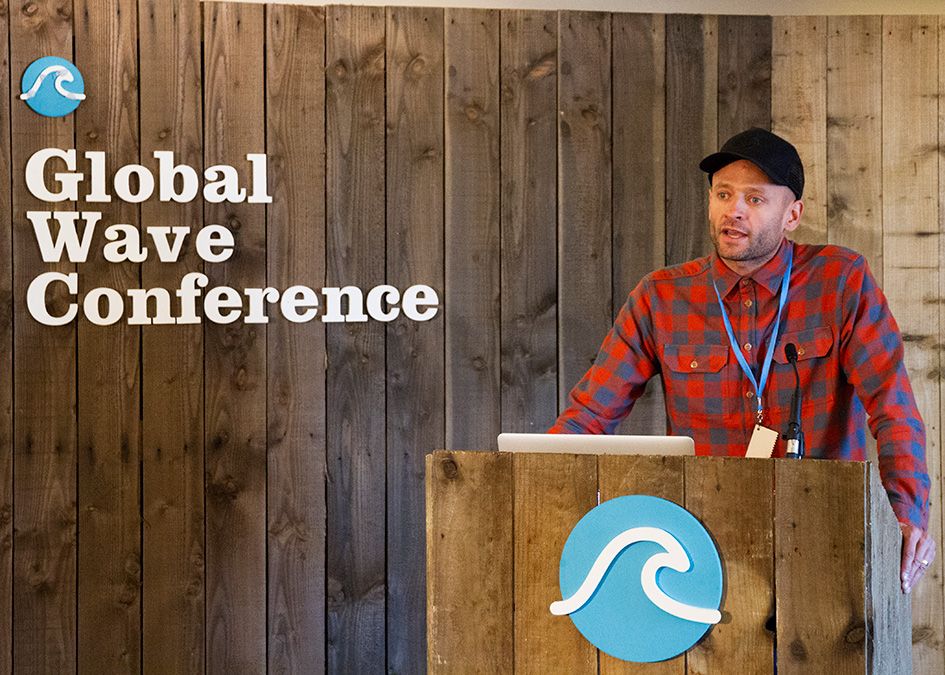 The conference, in its fourth incarnation, was organised and hosted by our friends at Surfers Against Sewage and thanks to their incredible organization and great team the ambitious itinerary was executed flawlessly. James was invited to deliver a presentation about artisan surfboards using locally sourced materials as part of the Innovation, Sustainability and Surfboards stream, and also had the honour of making a very special handplane to be presented to Tom Curren as the Global Wave Champion Award in recognition of his commitment to protecting waves, oceans and beaches. 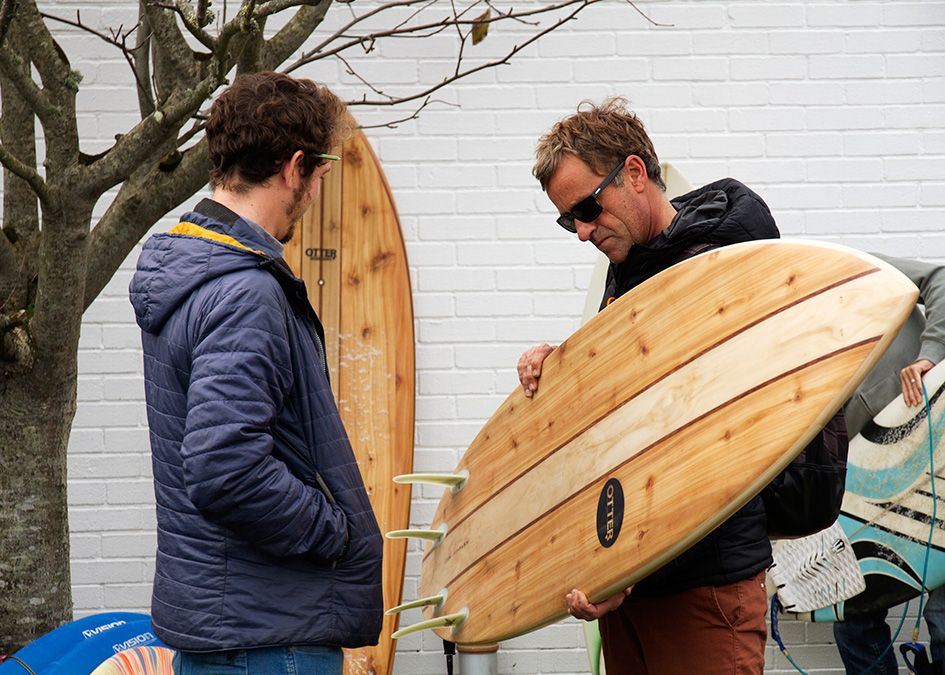 Shortly after stepping off the coach on Sunday afternoon, the team from Finisterre took delegates on a surfari, and a selection of our wooden surfboards were laid out on the grass in front of the hotel for the visiting surfers to catch a few waves on. The surf was shoulder to head high and there were some great sandbanks at the north end of Mawgan Porth that the delegates descended on; needless to say the caliber of surfing with a handful of professional surfers (including a multiple world champion) in the water was incredibly high. 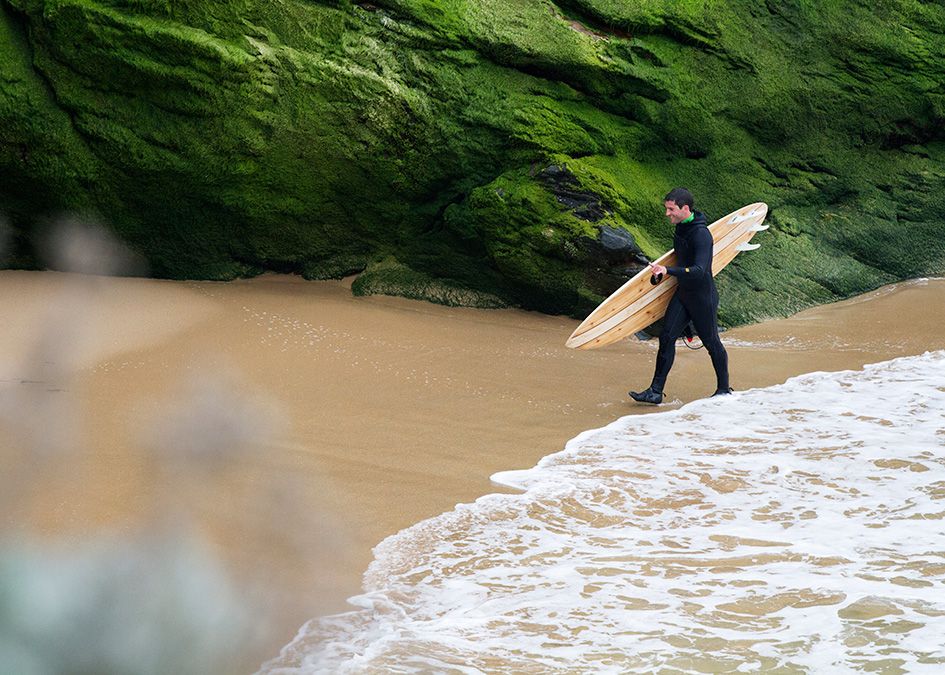 James took to the lectern on Monday afternoon, delivering the final presentation of the day. He followed Michael Stewart of Sustainable Surf who spoke about the Ecoboard Project and their efforts to set a worldwide standard for sustainability and environmental consideration across the surfboard industry, and Mark Price, the CEO of Firewire, who is leading the charge to implement sustainable business practices at scale within the surfboard industry without compromising on performance. Both talks were incredibly interesting, and the three of them had some very interesting and constructive conversations in the hotel bar that evening around the various approaches to reducing the impact of surfboard production on the environment. 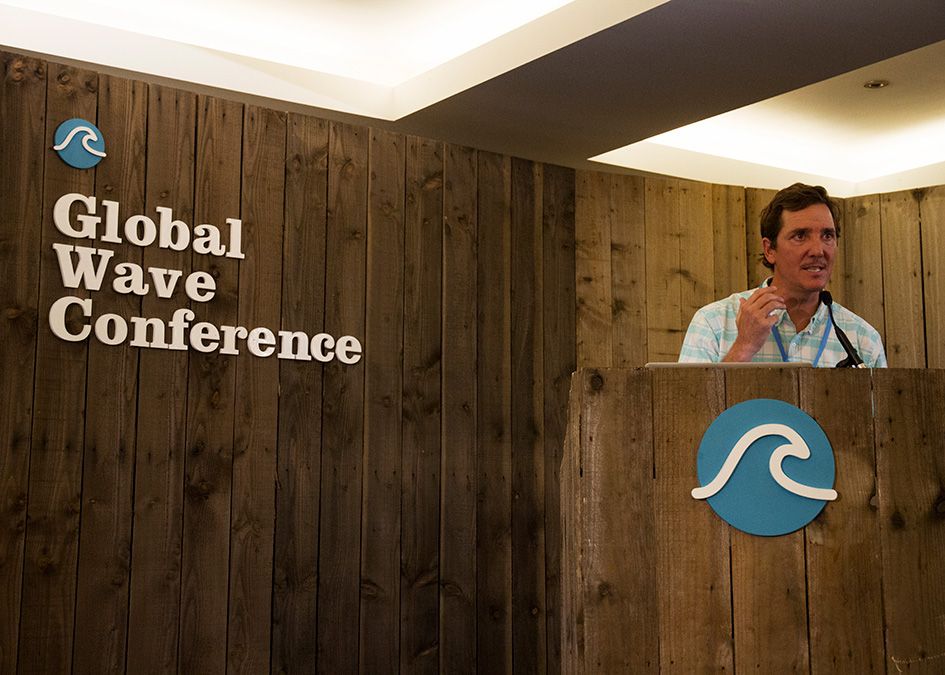 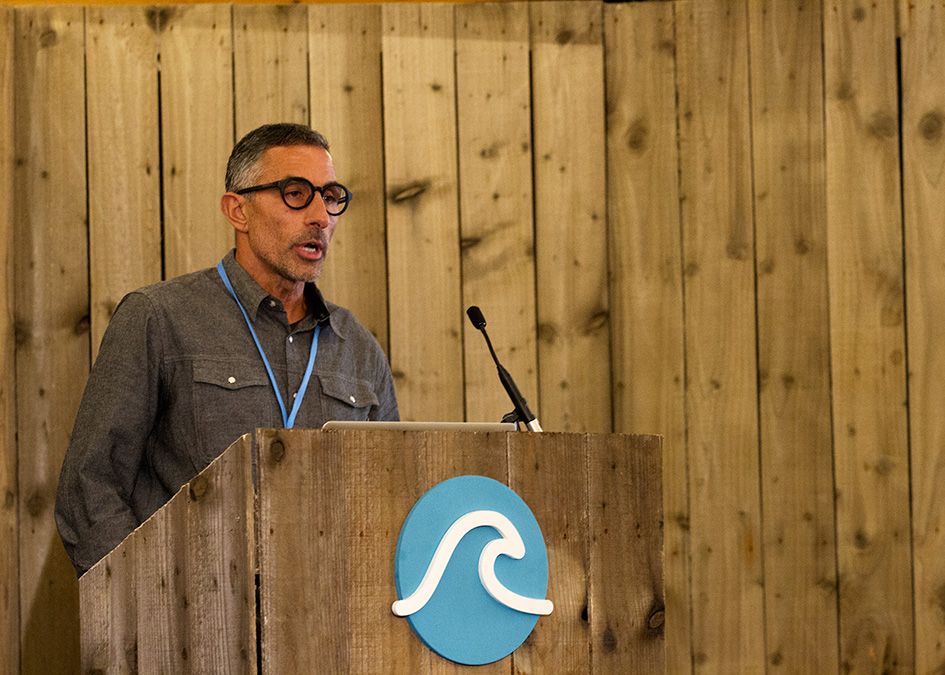 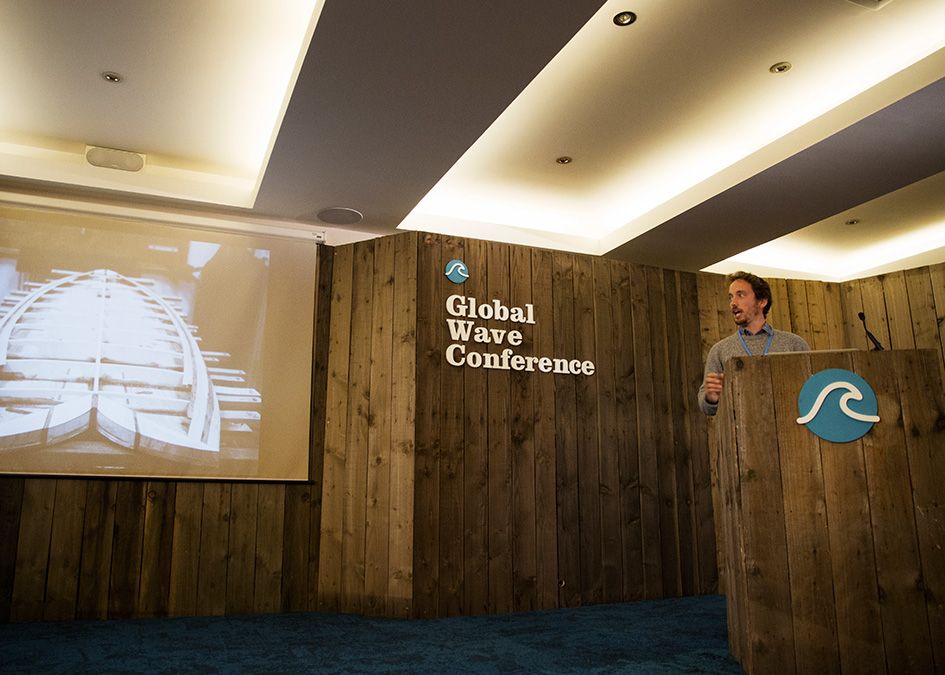 Tuesday morning saw Greg Long deliver a keynote speech that received a standing ovation; Greg shared the story of why he’s driven to challenge himself in big waves, his journey to becoming the most decorated big wave surfer and, ultimately, how it nearly ended his life. You can watch his incredible talk in full over on the Global Wave Conference site from Monday 19th October onwards, here. 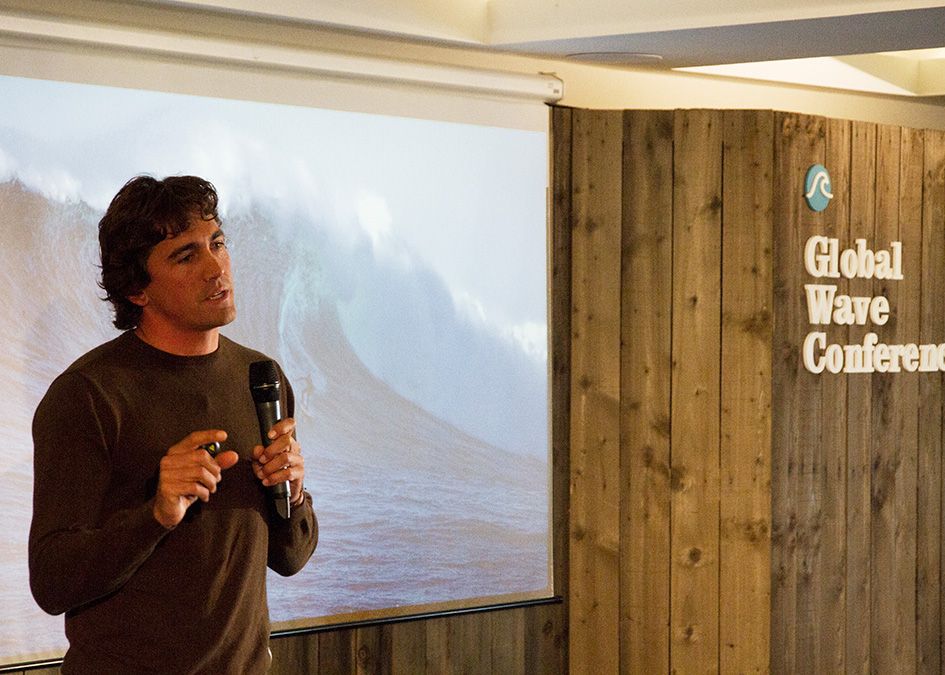 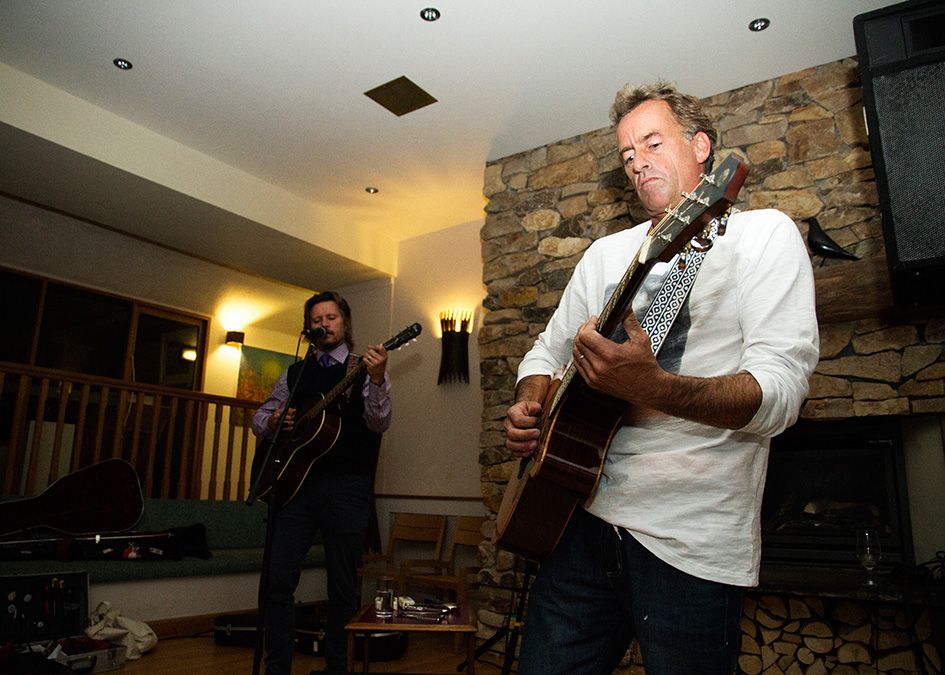 In the evening delegates and attendees were treated to an impromptu musical performance by Tom Curren and Brad Gerlach, which is something that all in attendance are unlikely to forget in a long time. 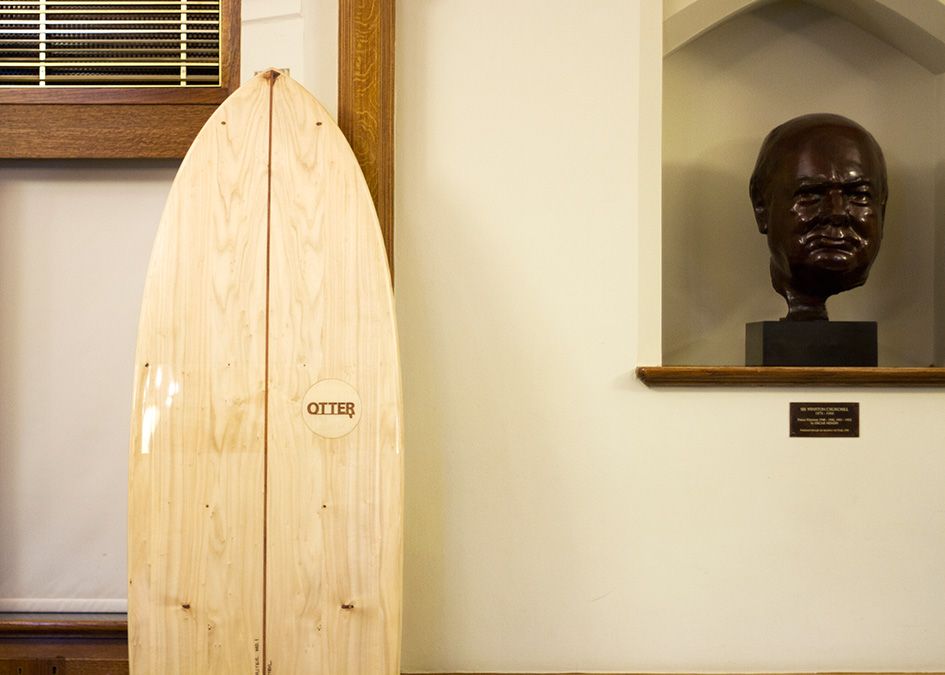 On Wednesday morning it was all-aboard the bus to London, which was another fantastic chance for James to talk further with some of the incredibly interesting delegates from both the envirosurf movement and the surf industry. We hope to be able to share the fruits of some of those conversations with you in the not too distant future. The Houses of Parliament is an unusual place to exhibit a wooden surfboard, but upon entering the Churchill Dining Room there was our 7’2” Coaster stood in between the rostrum and a bronze bust of the British wartime leader. After SAS’s chief executive Hugo Tagholm and Dr Chad Nelson of Surfrider Foundation had concluded the conference, they presented the Global Wave Champion Award to Tom Curren for his commitment to protecting the marine environment and for his role in setting up the Surfrider Foundation Europe in 1990. A special handplane was also presented to Chris Hines, one of the founders of Surfers Against Sewage, in recognition of the work that he did in founding the organization and setting it on course to protect surf habitats during the time that he was at the helm from 1990 to 2000. 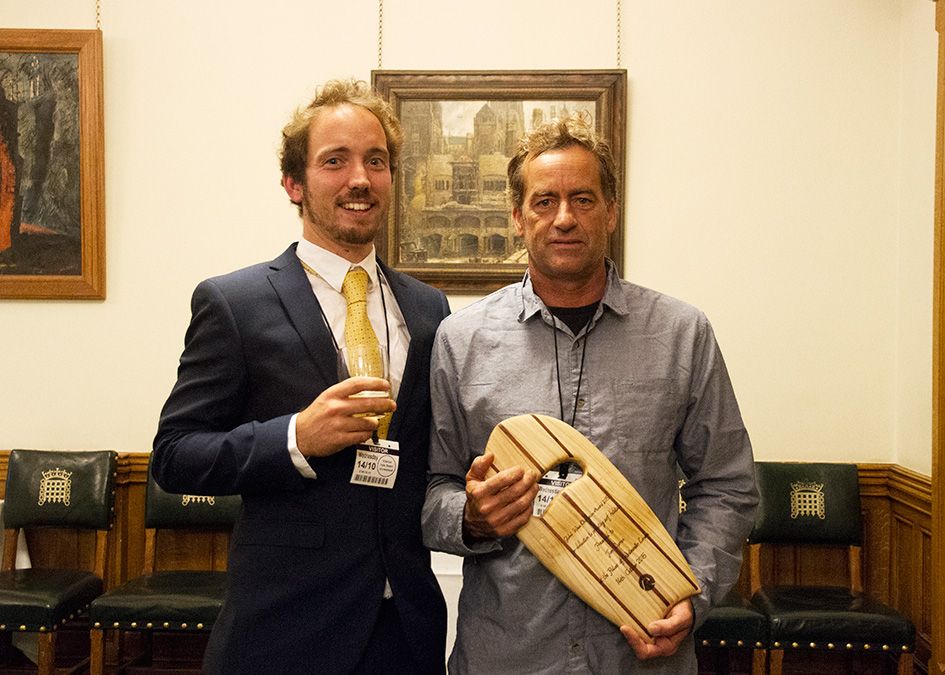 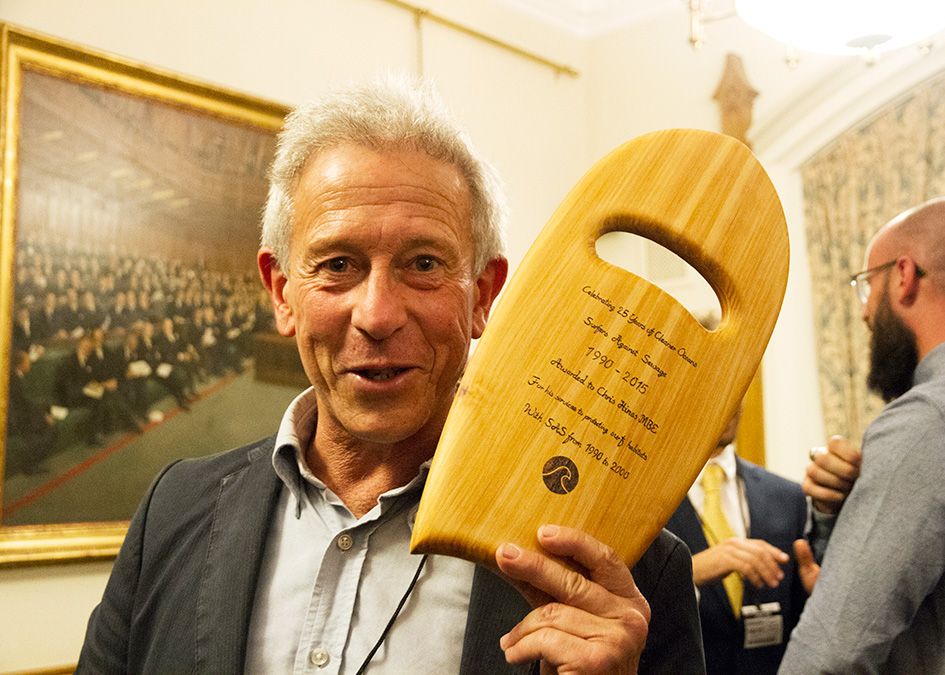 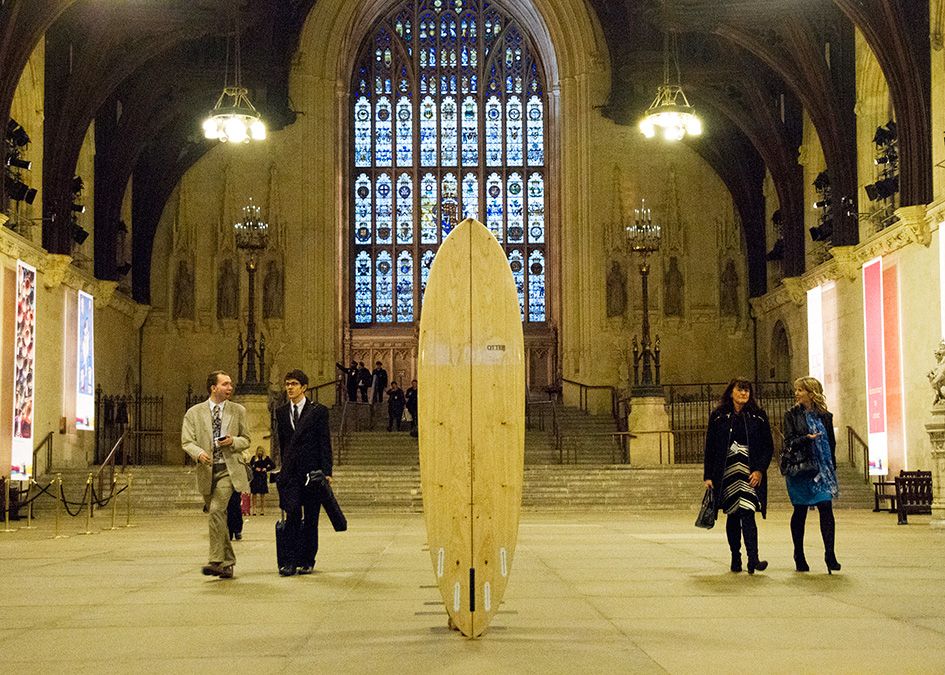