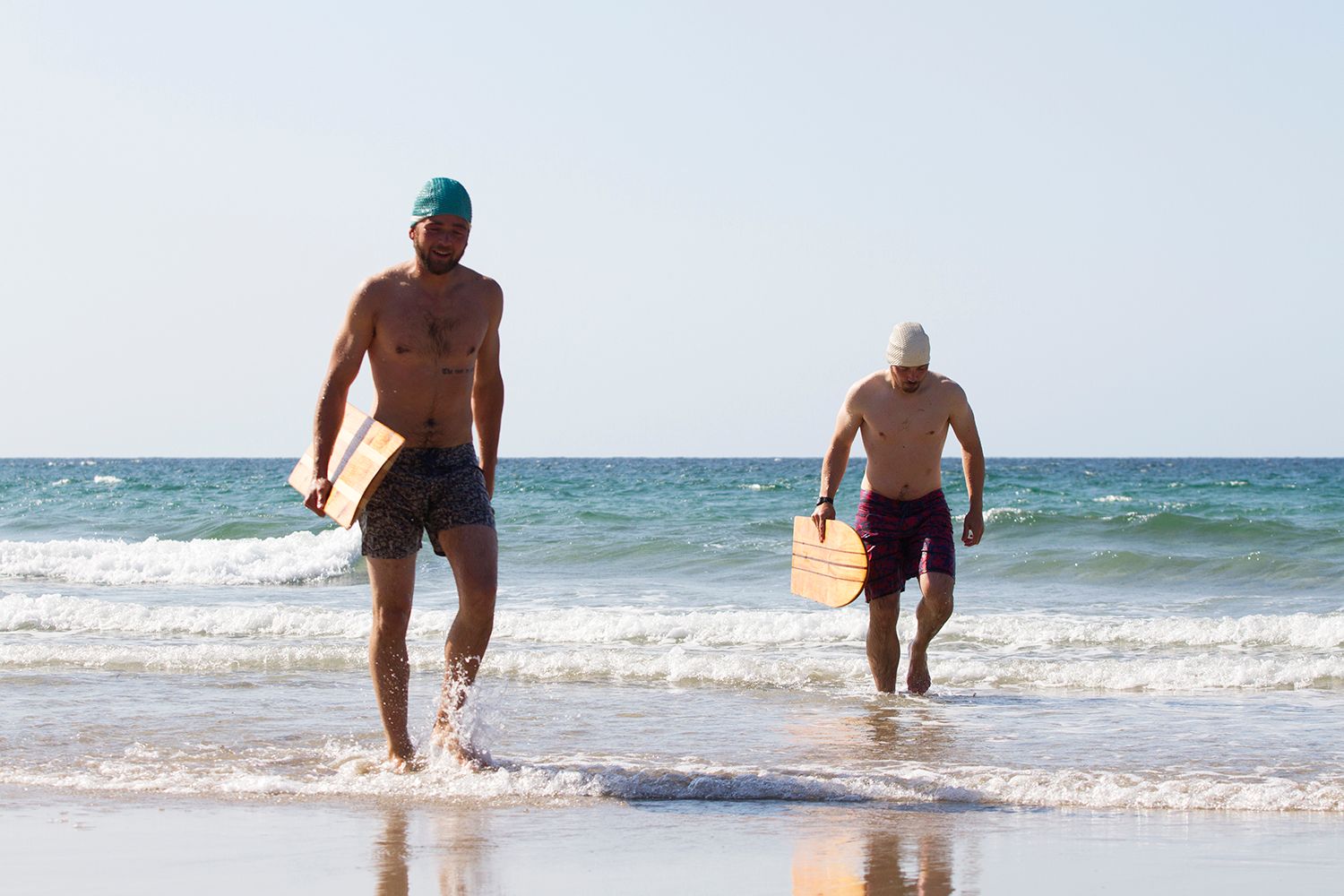 After August delivered us a mixed bag of weather and waves (to put a positive spin on it), the first Sunday of September at least dawned sunny and clear for the 13th annual World Bellyboard Championships. The waves weren’t anything to write home about, being small and choppy north-westerly wind swell, but nobody really seemed to mind – at least it was sunny for the day of the champs! Thanks to the times of the high and low tides things got off to a more relaxed start this year, with the hotly contested cake competition and the vintage swimwear prizes being awarded just after lunch before heats then got underway. The judges of the bake-off this year had to taste-test twenty samples and seemed to be suffering a bit of a sugar come-down when the staring claxon sounded for the first heat! We took our “workshop on wheels” set-up down to Chapel Porth, and spent the morning stood outside our stall, with James guiding his sister Vicky through the shaping of her own bellyboard.

It’s a wonderfully social event and it was great to have the chance to catch up and share some tea and cake with various friends who were also there and to see so many of the bellyboards that some of you have shaped with us over the past few years being put to good use. James, his Dad, Chris and our friend Tony were all drawn in the same heat alongside Jonathan and Alex Goodchild who were also riding their Otter bellyboards, making it an Otter dominated ten minutes in the waves! When the results were announced last Tuesday it was great to see that at least one of the bellyboards made with us in our workshop here carried a surf-rider to a top ten spot – congratulations to Thomas Barea who finished in seventh and to his son Harry who won the world title, whilst those of us from Otter were left floundering in the eighties! For a further flavour of the day, scroll down to view a small gallery of images shot by Mat and start counting down the days until next year’s champs! 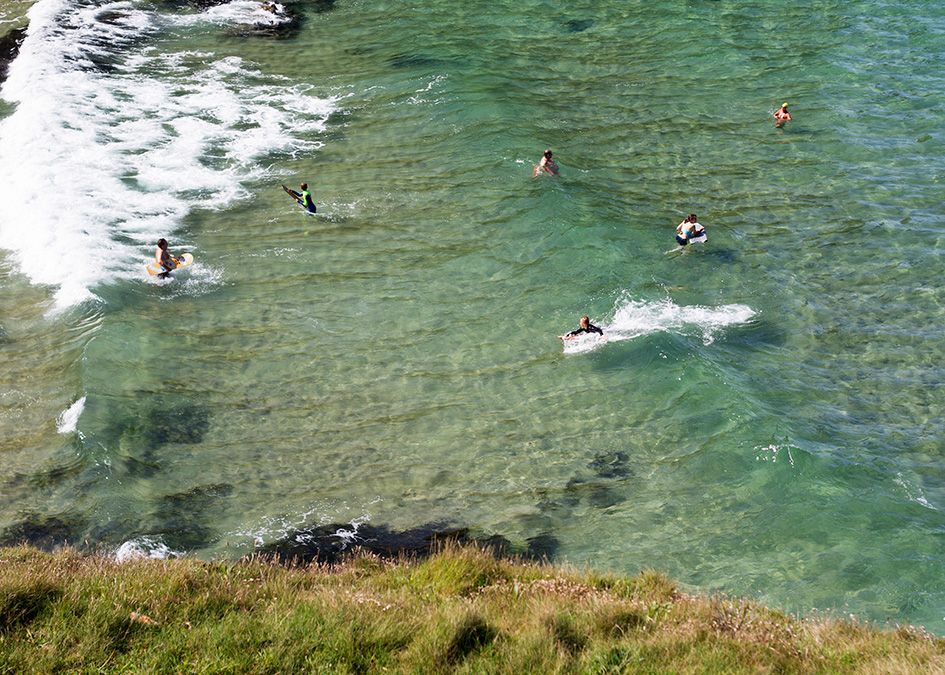 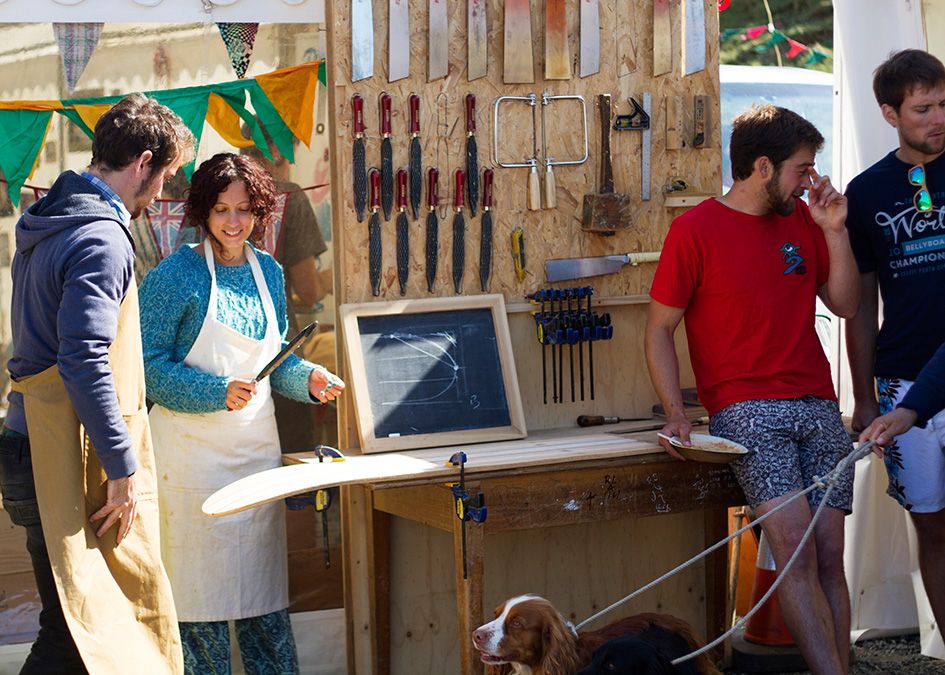 Bellyboards, bunting and baking, as James guides his sister Vicky through shaping her own bellyboard. 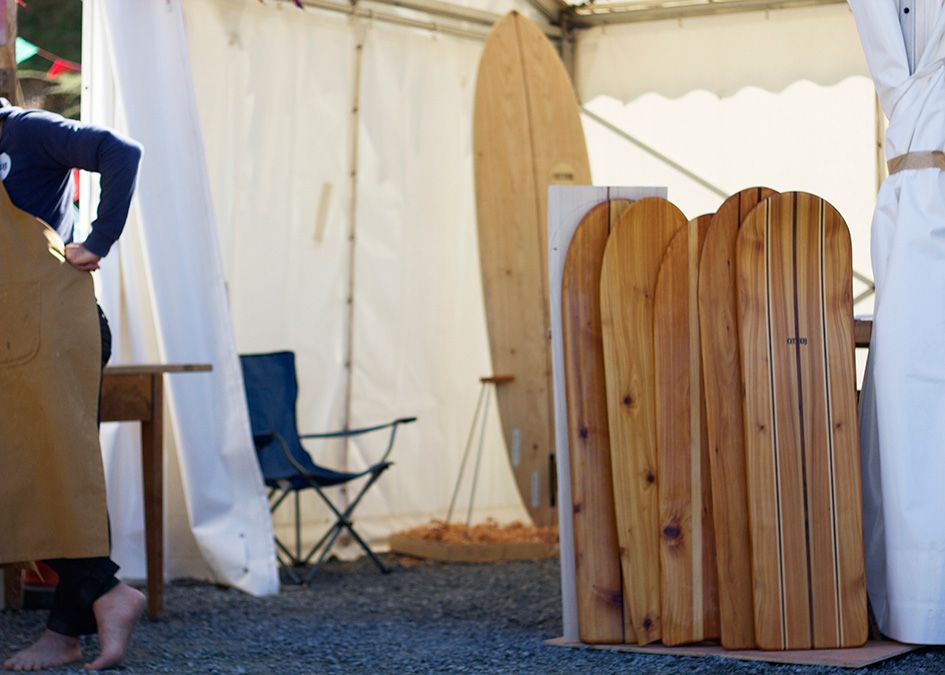 A quiver of bellyboards awaiting their moment to shine. 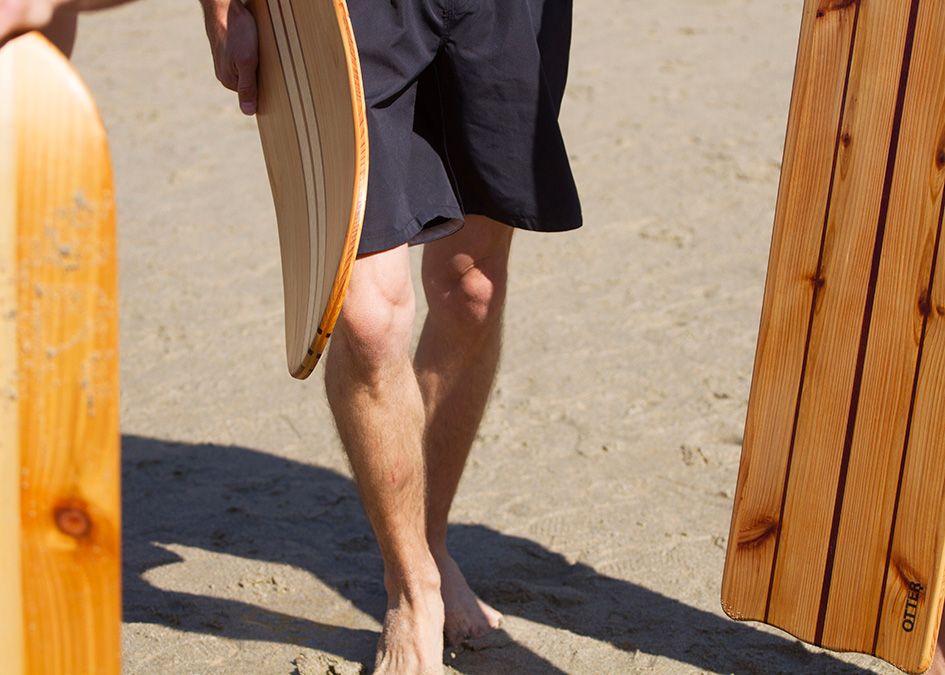 The great thing about seeing all of the bellyboards that people have crafted on our “make your own” workshops is remembering all of the unique templates and tail shapes and seeing them put through their paces. 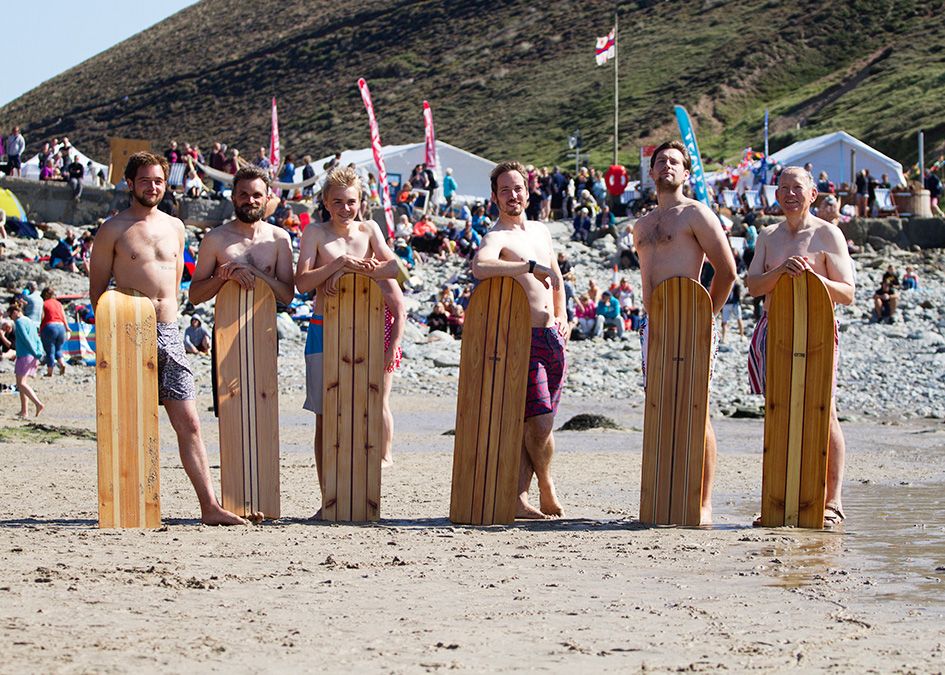 Heat 3 of the Juniors was an Otter-dominated affair. 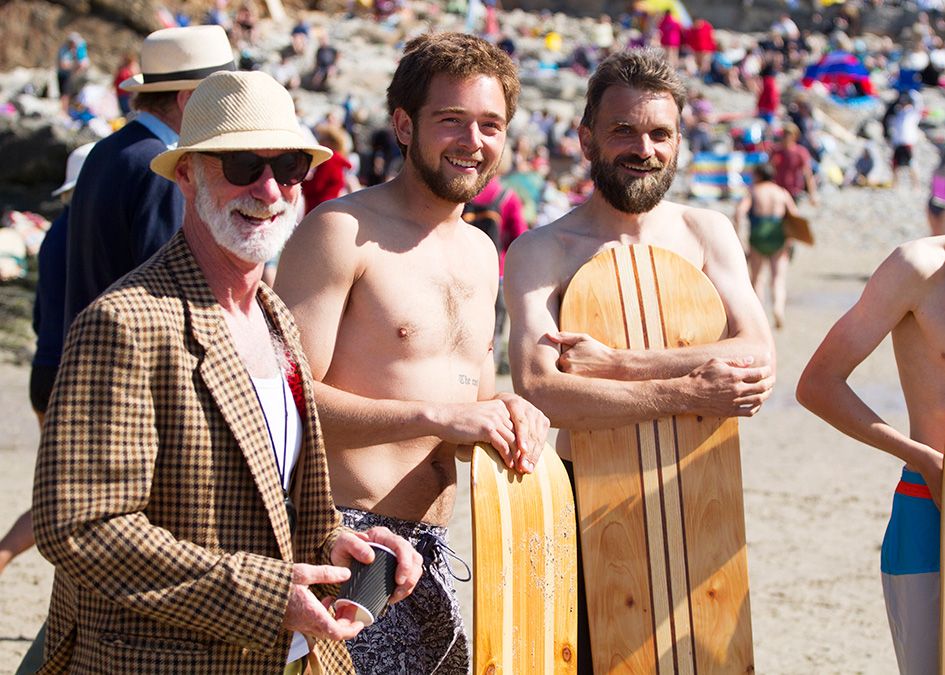 Chris and Jonathan Goodchild share a laugh with their warm-up instructor. 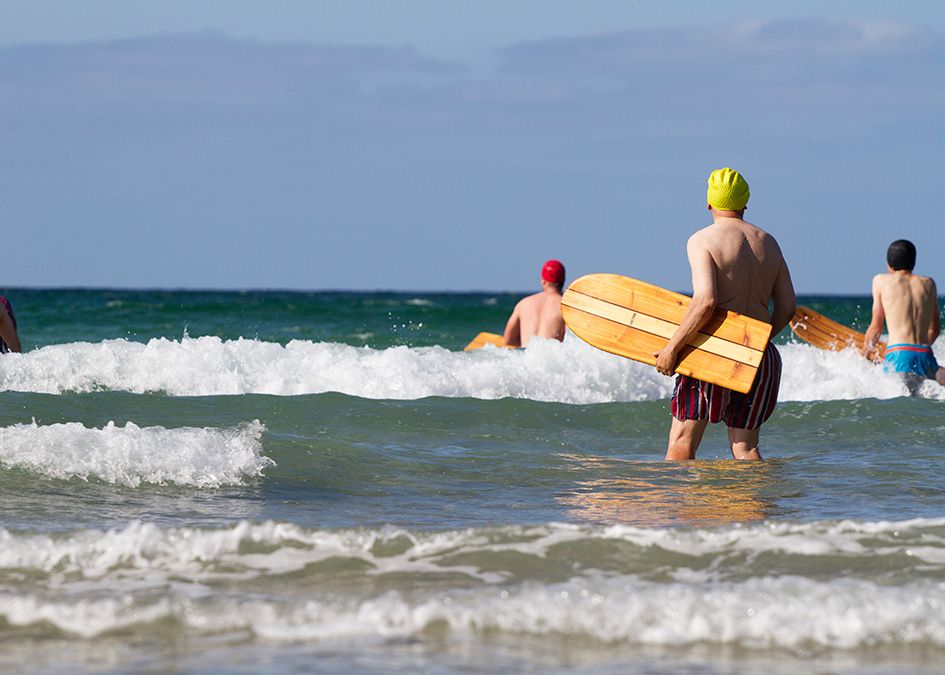 Wading out to waist depth. 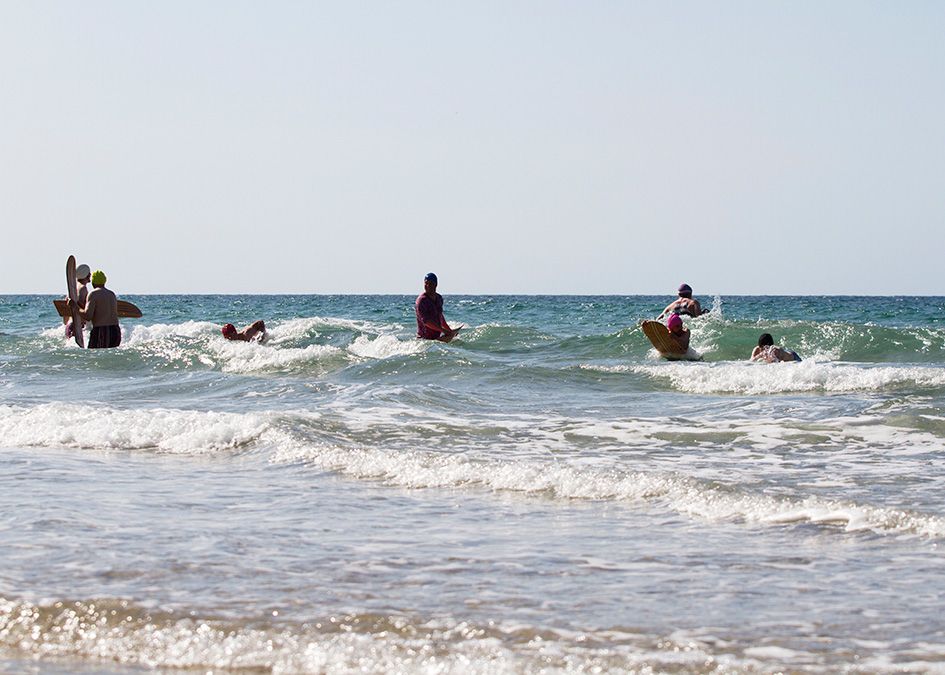 Waves-wise, conditions were challenging but everybody had fun regardless. 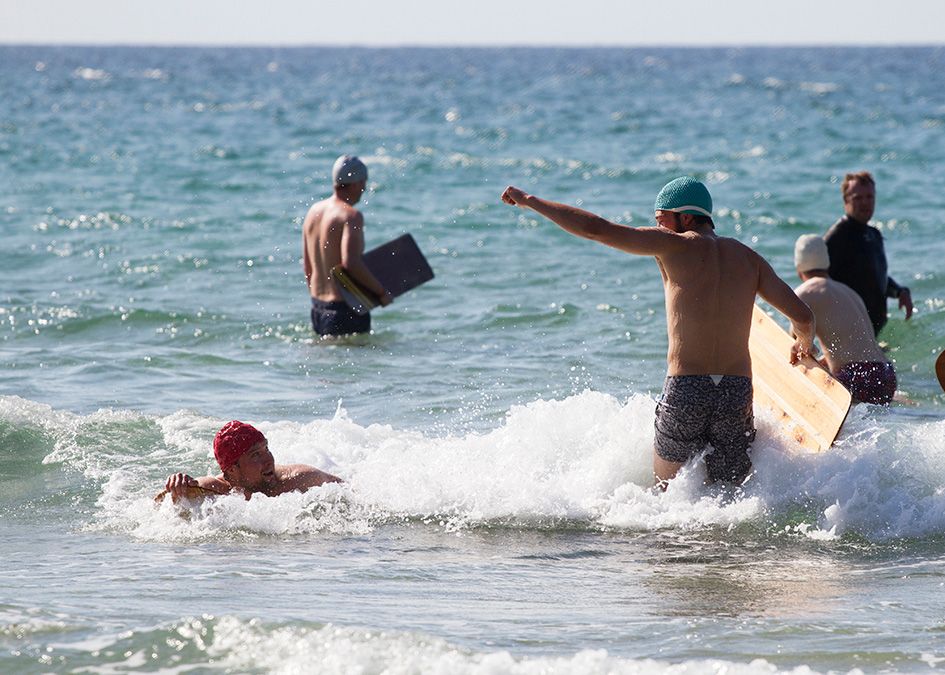 Chris cheering Tony on, who seems bewildered by all the fuss. 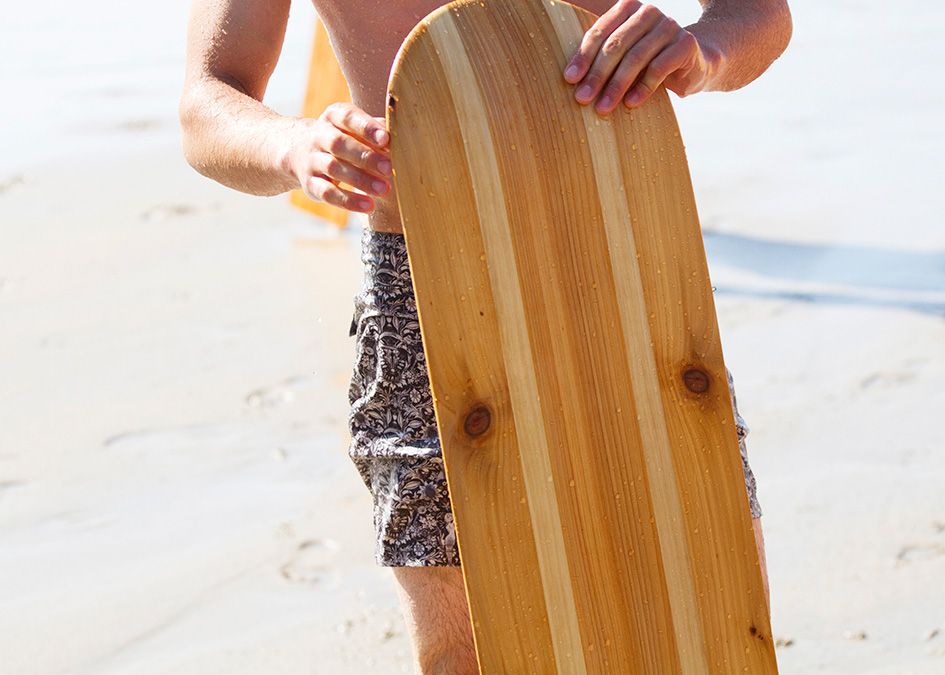 The champs is strictly no-wetsuit affair, and it was great to see our friends Riz and Ali from Riz Boardshorts at this year’s event offering stylish options for those competitors who don’t own any authentic vintage swimwear.