A couple of weeks ago we had the magical experience of bellyboarding with a dolphin! Since then some friends at the British Divers Marine Life Rescue have been in touch, to tell us some important information about social solitary dolphins, and we thought we should share… 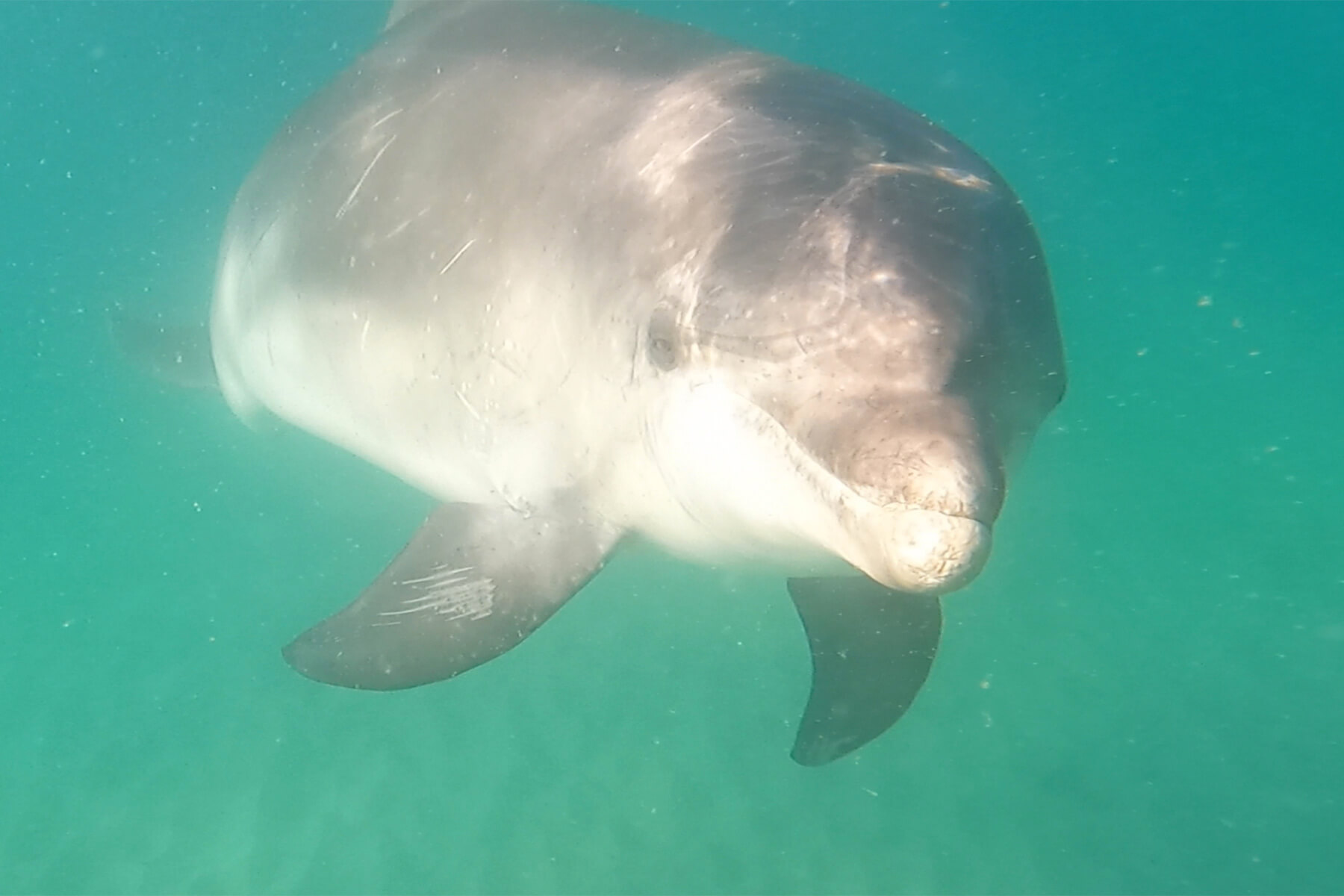 So how did this happen?! We all met at the beach in Porthtowan, Cornwall, like we do every Monday morning, to go surfing or bellyboarding or body surfing depending on the conditions, (any opportunity to play with our wooden wavecraft!) with the aim of getting in the sea whatever the waves are doing.

This particular Monday morning at the beach we were greeted with beautiful blue sky, a beaming sun and tiny offshore low tide peelers. There was just enough size to the waves to catch them with a bellyboard, so we all entered the water with the aim of floating around with our friends and sharing a few rides. 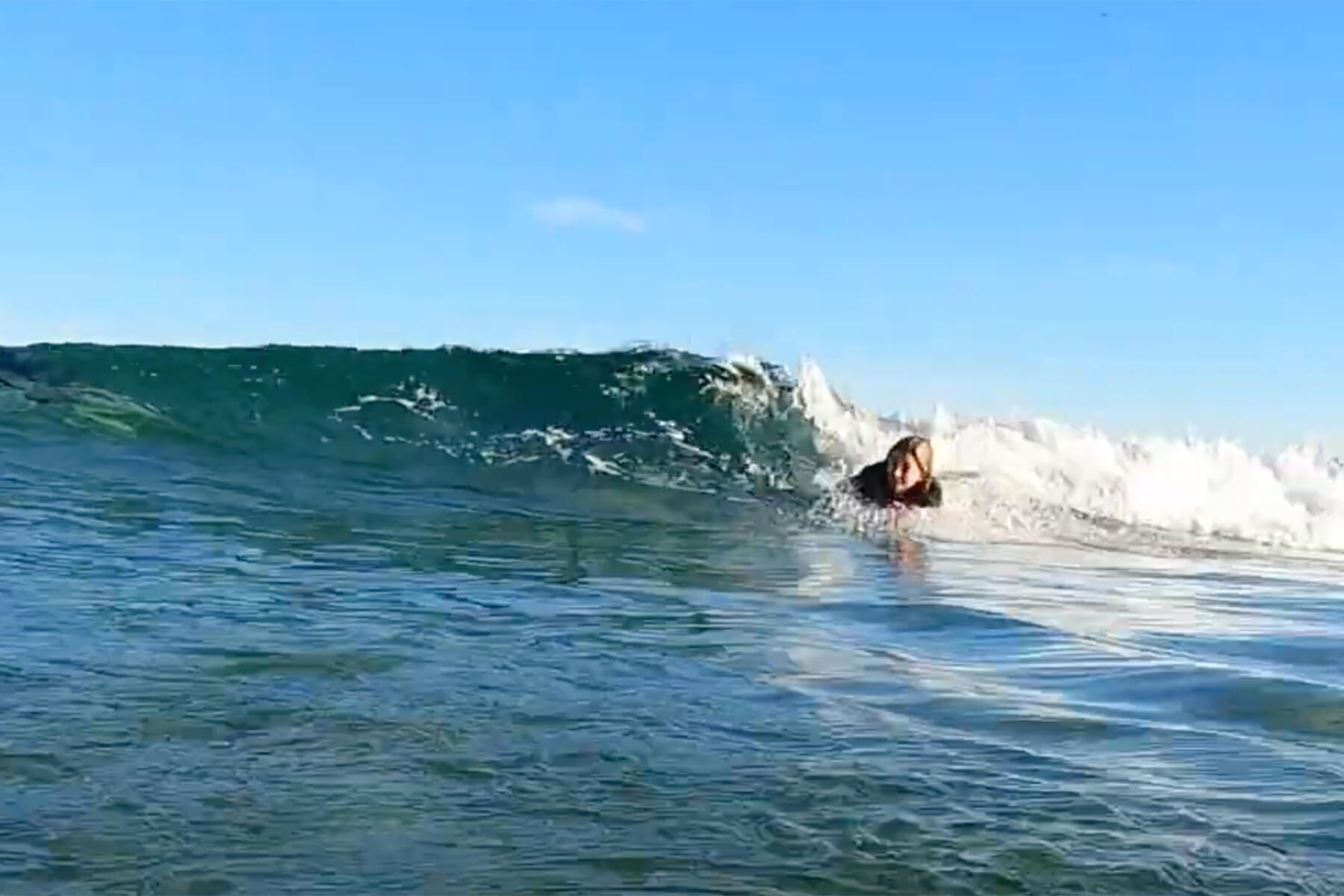 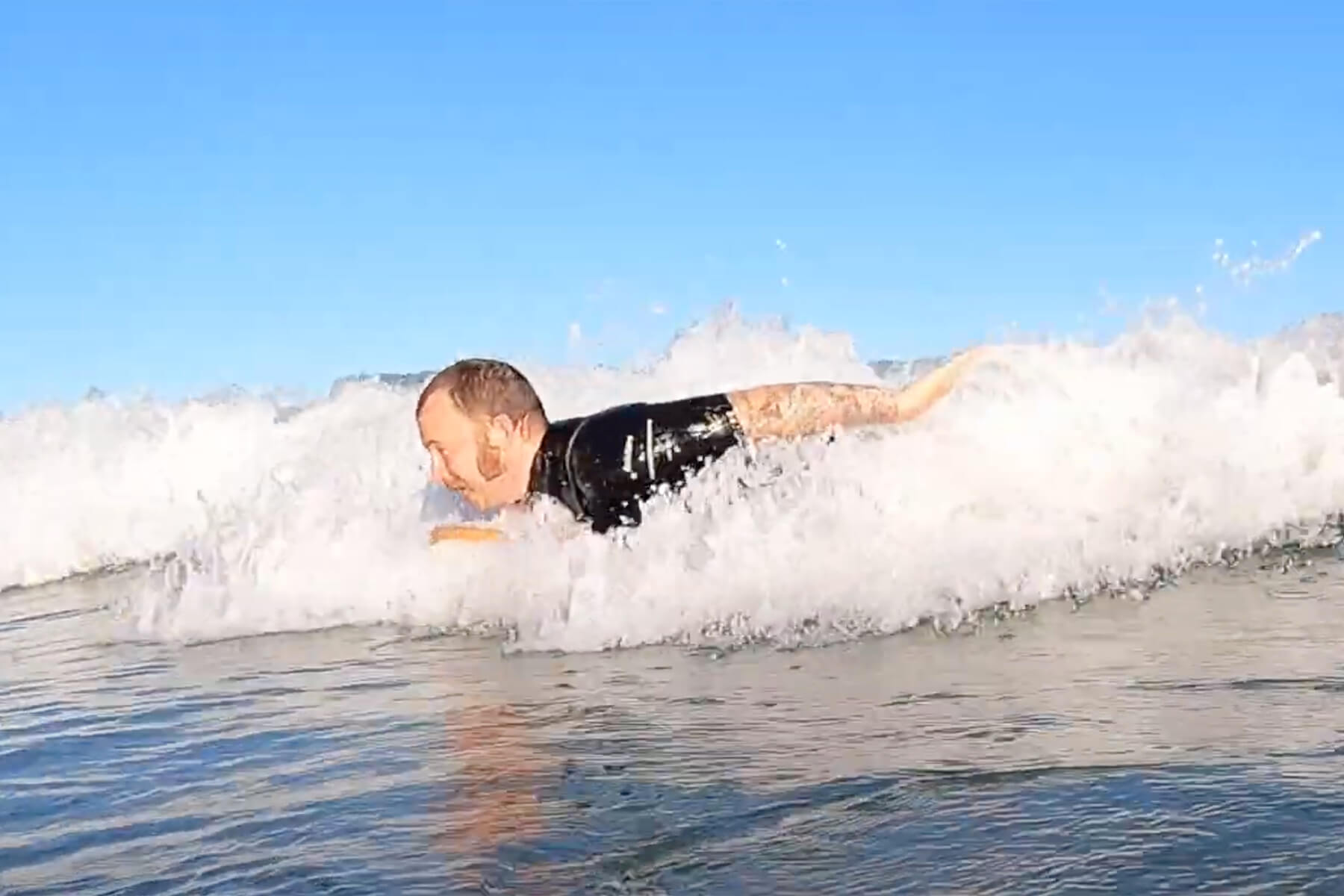 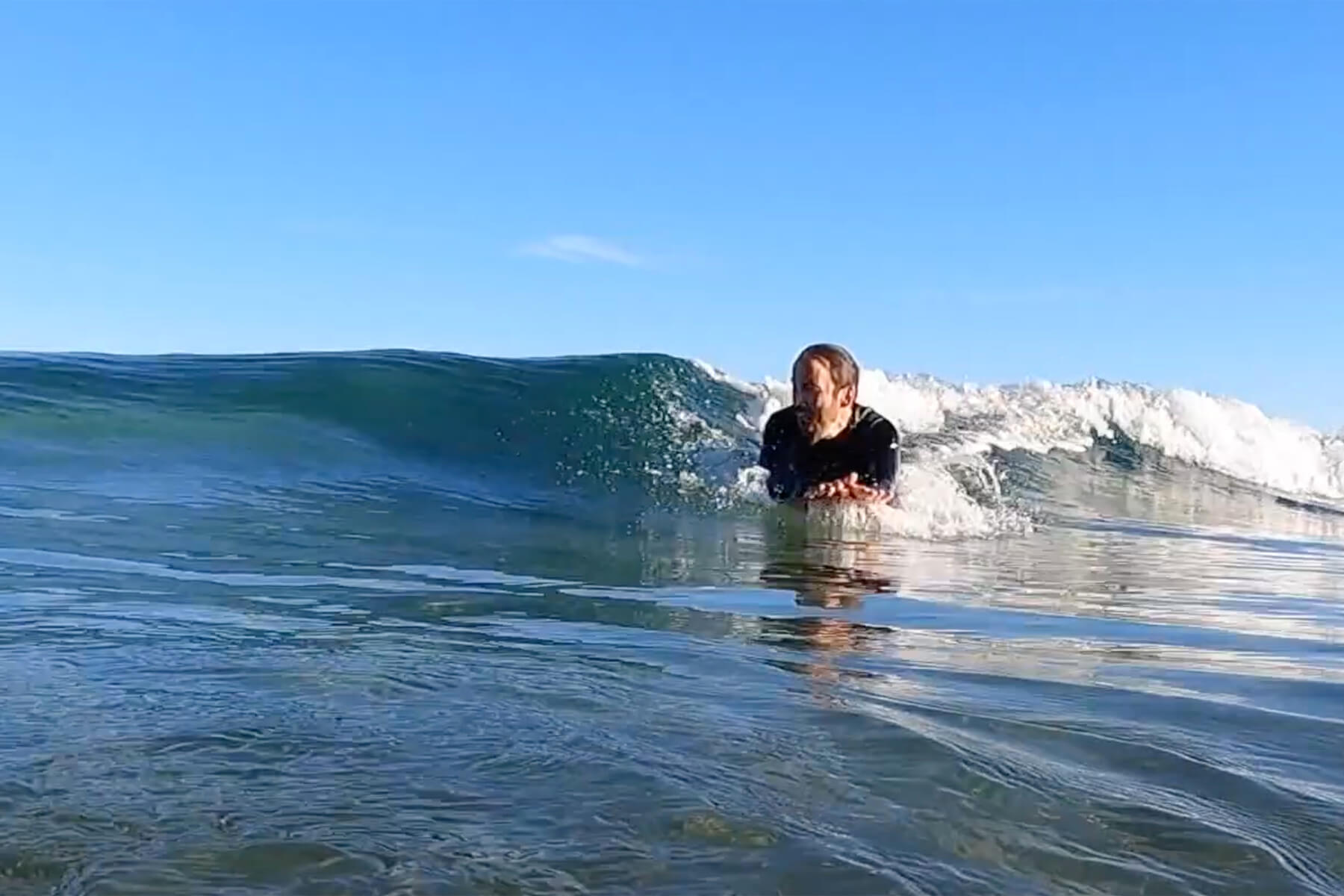 Around 10 minutes and a few waves in, Faye who had paddled out beyond our group was waving and shouting something we couldn’t hear. We soon learned what she had been trying to communicate to us… as a DOLPHIN breached right in the middle of us! Blowing water, wobbling the dorsal fin and announcing their arrival.

Catching waves had now become irrelevant, as we all floated around, open mouthed and in a state of shock. As our new friend swam around us, breeching every now and then, seeming inquisitive and playful. We were aware that we were now guests in a strangers abode, some of us swam around a little, but we mostly tread water, watching in wonder as the dolphin continued to glide around us. 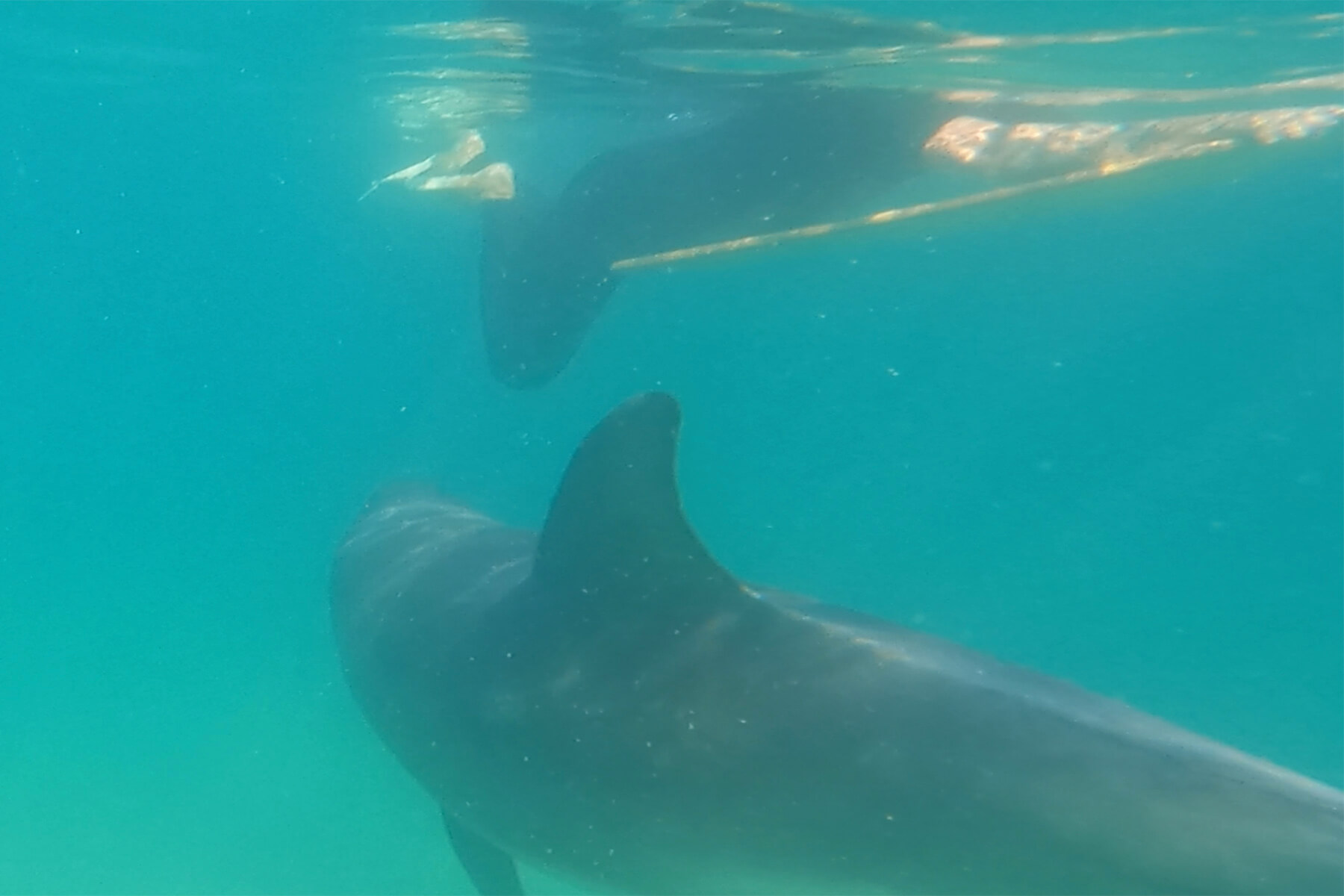 Since sharing the footage, friends have been in touch to share information about this dolphin and social solitary dolphins in general. This particular dolphin is known as John, and has been spotted in Hayle, St Ives and Newquey over the past few weeks. He has approached swimmers near the shore and has playfully made his presence known, astonishing onlookers and bathers.

There is a serious side to these seemingly innocent encounters, as highlighted by the British Divers Marine Life Rescue.

‘Advice includes not purposely going into the water to play with it, to not feed it, to keep boats moving at a steady course and speed and to avoid chasing and fast manoeuvres.’

This is due to the fact that social solitary Dolphins are unpredictable creatures and can turn aggressive, they are also in danger of becoming used to human interaction and swimming close to beaches, making them less likely to return to their herd and increasing the chance of them being killed/injured by boat propellers.

Hopefully we can continue to appreciate our dolphin friends from a distance, and enjoy the memories from a rare close encounter!