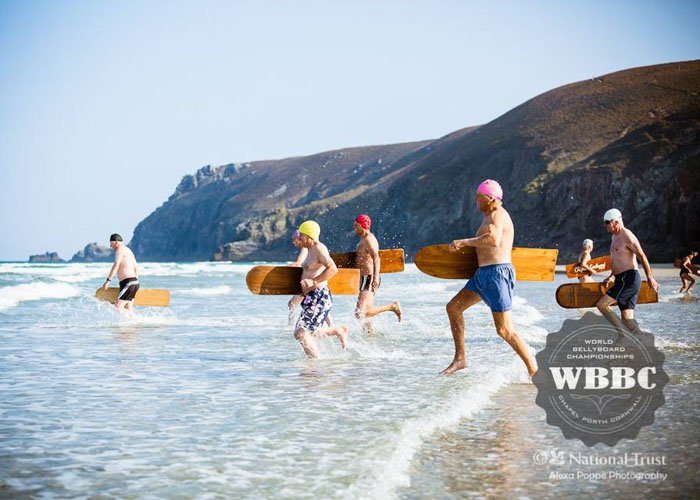 Last Sunday dawned bright and sunny, a pleasant contrast to the weather for the World Bellyboard Championships in years past.  The champs is one of our favourite events to attend; a last hurrah for summer and an opportunity to thumb our noses at the oncoming cooler weather of autumn by spending one last day in the sea without the need for a wetsuit.  This year (now it’s 12th) the event was busier and better than ever, with entries fully booked weeks in advance and a queue snaking across the car park when the registration tent opened at 8.30 am, despite the forecast for very small waves. 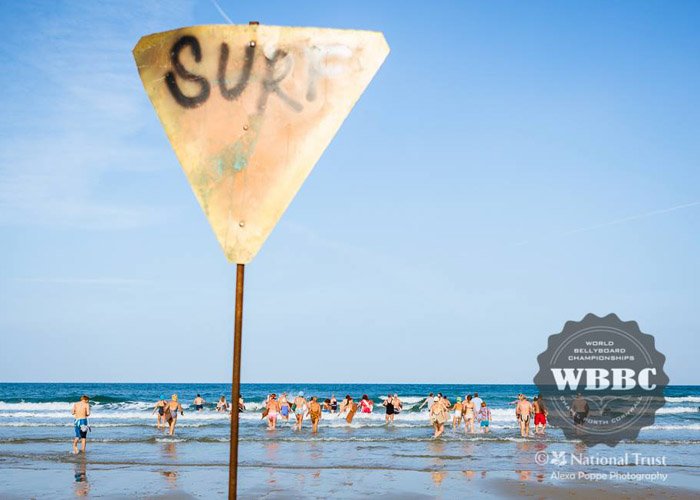 We were there bright and early, excited to be involved again in such a wonderful and unique event.  This year we produced all of the winners plaques, and the wave trophy that we crafted last year for the Ben Stockley “Spirit of Bellyboard” award was on display ready to be passed on to this year’s winner.  Thanks to the “Build-Your-Own” workshops that we’ve held throughout the year there were more and more Otter bellyboards on display both leaning up against the display wall and in the water.  Most of the team entered (and made it into the top 100 we’re relieved to say!) as did James’ parents and sister, who also spent the day shaping a board for herself at the makeshift workshop that we had set up on our exhibitors stand.  So, as well as catching up with friends and spending our 10 minutes catching waves in our heats, we also managed to produce a new bellyboard from scratch and showcase what happens on our workshop days.

We’d like to congratulate this year’s World Champion Ian McDermott, and thank Nick, Chris, Rich, Jen and all of the hard working members of The National Trust who make this event possible and so, so, much fun to be a part of.  We’ll see you again at the same time next year. 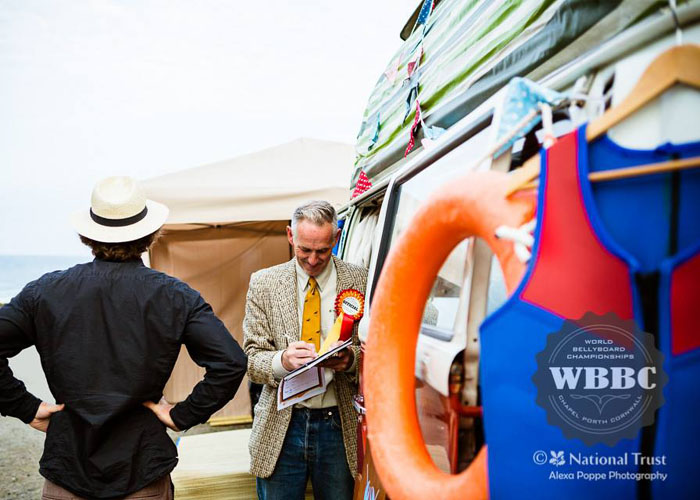 One of the founders of the Championships and the voice of the event, Chris Ryan. 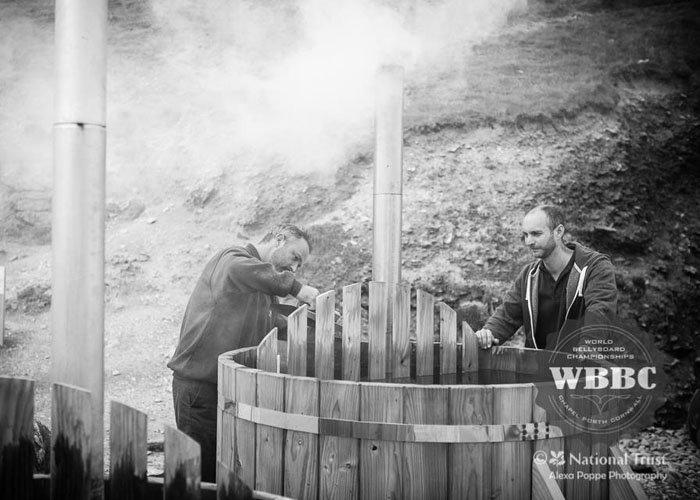 The guys from Cashen Woodcraft build these beautiful, wood-fired, hot tubs from timber that they grow, fell and mill themselves here in Cornwall.  They were a popular way to relax post-heat for competitors! 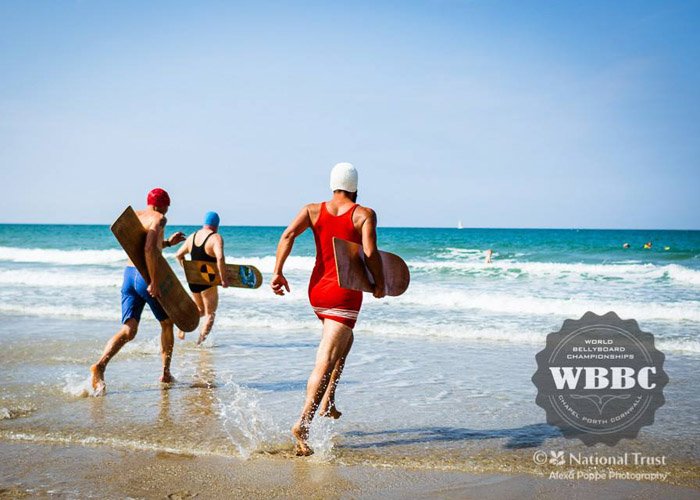 The starters claxon, with 2014 World Champion entering the surf in the blue cap. 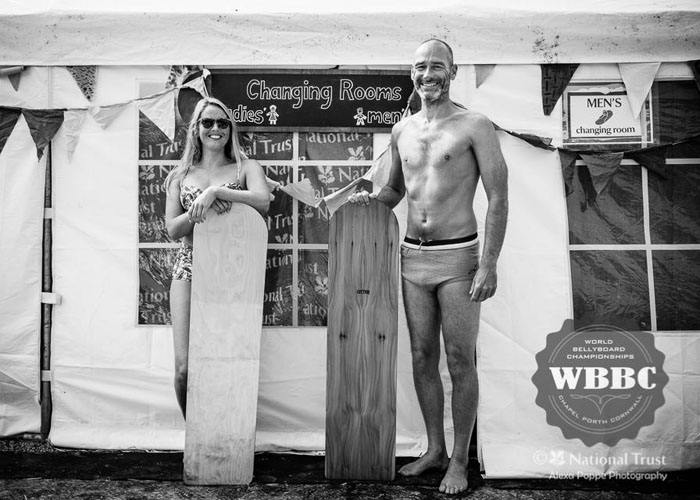 Demi and Chris from Approaching Lines and the London Surf / Film Festival, in costume and with an Otter bellyboard. 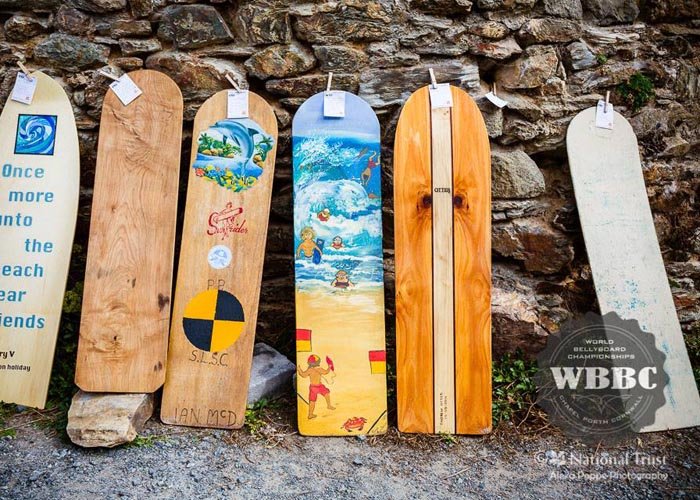 An Otter in the wild…alongside the World Champ’s sled (with the yellow and black circle). 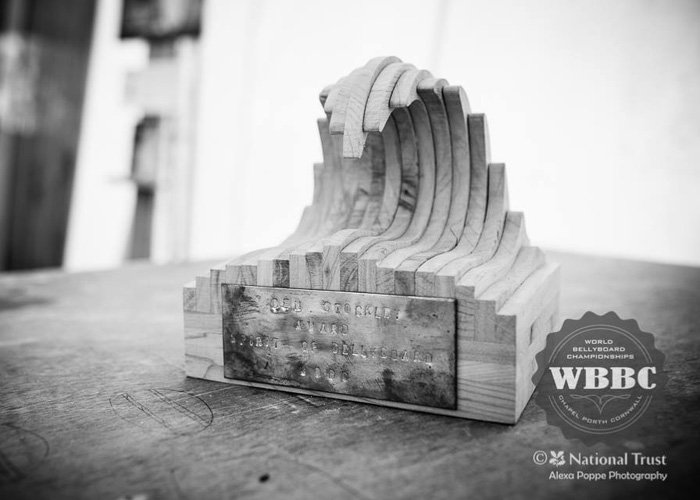 The Spirit of Bellyboard Award, in memory of Ben Stockley, is awarded each year to the contestant who personifies the spirit of the event.  The perpetual trophy is passed on to the new winner at each year’s event.

All images copyright of and produced for the National Trust by Alexa Poppe.